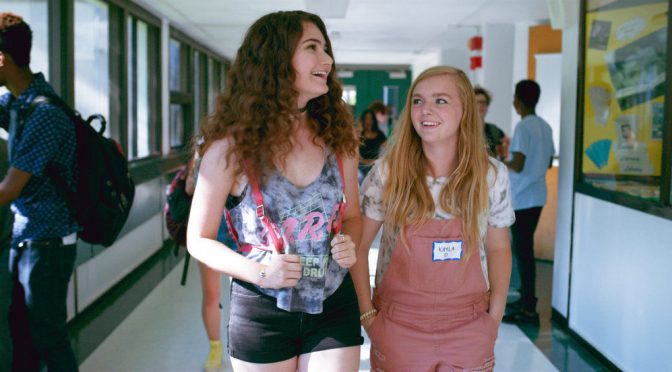 This summer, we’re going to have a film that has never ventured to the life of Eighth Grade. A grade in which most of us leave middle school/junior high and start our life of high school. Today in our second part of EMExclusives, we have two of the young stars from the movie. Ladies and gents, I bring to you Elsie Fisher who plays Kayla Day, an eighth grader in her final week of middle school and Emily Robinson who plays Olivia, a high school senior who Kayla shadows for one day.

What drew you to your respective roles in Eighth Grade?

Elsie Fisher (Kayla): I just when I was auditioning around I came across Kayla’s audition or the movie’s audition I suppose. You know that I didn’t get to see much of Kayla. In the original audition, the only script we been over is her videos. Her first video was the first audition for me but as I got callbacks for it, I grew this appreciation of the character cause she’s an honest portrayal of a teenager which you do not see in a lot of roles for teenagers.

I have to agree, the teenage roles I normally see are perfect, mean, crazy but never the true essence of a teenager.

(EF) Yeah, they are they just tinier people in school.

Emily Robinson (Olivia):I think what’s really special about this script and about both Kayla and Olivia is that are kind of fun and awkward and quirky and like all of these things and feeling like a bunch of conflicting emotions and that’s super exciting.

How similar are the roles to your personal lives?

(EF) Kayla and I are very similar people. We’re both anxious, awkward and we look pretty similar but then again, I am not her. I think that I am a little more confidant because I had to deal with more social situations, I guess. I definitely feel her or feel like her a lot in my life.

(ER) No but I think that I am more Kayla than Olivia which I think how more people relate.

I can tell by the chemistry that you two showed just now that you both have great chemistry with each other in the film. Speaking of which, talk about the chemistry between Olivia and Kayla because this is one of the few times on film that we get to see High School Senior help the incoming Freshman adapt to their new environment.

(ER) I think Olivia was Kayla

(ER) I feel that there this kind of kinship there because “Oh my God, I was in that position and I felt all of these awkward things and I feel like “We need more of that. We need people kind of see someone that find their place in that crazy situation of high school.”

(ER) We had some sisterhood in a way.

(EF) It was a fun female friendship to portray and it nice that it’s not being driven by anything like boys, fashion or you know we hate each other but we’re friends. It’s like we’re just friends and that was really fun because Emily’s fun.

(EF) I really love the fact that Emily was very clearly Kayla at one point, like you can see it. It’s nice to have that mentorship between the two.

We know that social media has played an active role in this film. Are you both active on social media and since making the film, does it change your perspective of it?

(EF) Yeah, I am active on it and Emily is too

(EF) For me, I try to pay less attention to social media and I try to chillax with it a bit because I used to take it seriously. I’m like “This is my reputation, this I who I am”. I just kind of blindly used it. Now I try to be aware of it and I use to blurt out like funny thoughts that I have. I think I still care as much though about how many likes do I have or how many retweets or comments, whatever. So, it hasn’t like fundamentally change my how I feel about social media but I think that I do view in a different light.

(ER) Yeah what I think is special about the film is jut forces you to take a second to think about it and its not as though like I don’t think it vilifies social media. I think it shows the craziness of like feeling this need to project this image of your life as you’re still living like there just something that’s so reflective that I don’t think you can really do in the moment because you present this false self. I think it’s interesting to think about it but at the same time I try to take everything with a grain of salt but I do think it can be fun.

(EF) I just think with the film we try to portray it honestly and get people to look at it honestly because the film doesn’t take a stance on it. It doesn’t say that its good or bad, that’s up to your interpretation but I feel that a lot of people do look at it in a certain light. Whether they’re like praise this or we hate this, we just want to show it for what it was.

(ER) And honestly, the internet is great and it’s also awful. It is all of these things. It’s like I don’t think there is a way to say that “Social media is bad!” That’s not deductive and not true.

I feel that the film with my experiences with social media in eighth grade that its totally different because when I was an eighth grader, the internet was just beginning and totally new and now to see how it happening and evolved over the years. I feel that it has a mind of its own.

(ER) Even though we didn’t talk about it in the movie, the difference that I had growing up on social media versus you is that it is different and I don’t think its fundamentally different but I feel like for the people being born now that’s going to be crazy when you realize when they were born and SnapChat has always existed.

(EF) I have a younger brother. Me and my parents have tried to keep him off of it a little bit because we’re all addicted but watching his generation go through social media and how normal it is. I didn’t start using it until I was eleven at the latest I think. My brother’s generation is like it’s insane. It’s like so ingrain in their brains already. I think it’s really changing the way we think and shortening our attention spans.

(EF) It’s also increasing our need for information because something I noticed with a lot of young kids in the internet is that they would watch so many fact videos. They need new facts and information like what I can I learn about this and its good and bad. I think it’s a little bit of an overload.

What are your fondest memories of Eighth Grade, not the movie but real life?

(ER) I had a great creative writing teacher. So I don’t know if that’s weird….

Oh no, not weird at all.

(ER) She was the highlight of it because I think that’s when I kind of admitted that I wanted to study that eventually.

(EF) I had a great arts teacher, I still remember her. I actually had her in seventh grade as well. She was just fantastic! She was like a grandma to me in the best way. There were a lot of little moments especially when we went on field trips in eighth grade when I felt very good about it. I think school, as a whole in eighth grade, kind of sucks but there were moments of it when were out of it that’s still going through that time doing school stuff. It’s a humor that I started to find myself as a person a little more.

If you have some advice for someone that’s going to high school, what advice would you give them?

(EF) I would say “Chill a bit, everything’s going to be okay. Your eighth grade teacher is probably super hyped but they’re like “High School is where is happens” and you get stressed out. Also, be cool being yourself because being other people sucks.

(ER) I mean Elsie said it all. Don’t worry, it continues. It’s not now or never. You have your whole life ahead of you.

(ER) And maybe it will be amazing and if it isn’t, that’s ok. A lot of people feel that way.

What do you hope teenagers will take away from “Eighth Grade”?

(ER) Just know that you’re not completely weird for feeling the way you do. Probably everybody in the world feels exactly the same tuff as you unless they’re an alien or a robot.