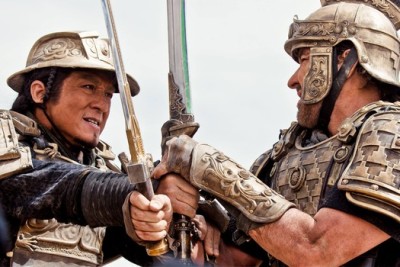 It’s 50 BC and Huo An’s (Chan) Silk Road Protection Squad is intervening in a nasty situation between two groups from other countries. To resolve the problem, he defeats Cold Moon (Peng Lin) in a fun, Jackie Chan-style fight (not surprisingly, Chan is also the film’s action director). In so doing, he accidently removes her veil, which she insists makes them betrothed. This will not be the only jam Huo An gets into.

Shortly thereafter, he and his squad are framed for smuggling gold (Roman gold) and banished to Wild Geese Gate – where they are ordered to help restore the city. No sooner than they arrive, a Roman legion led by General Lucius (John Cusack) shows up and begins to storm the city. Fortunately, Huo An manages to hold Lucius off in a one-on-one fight (again, very witty in the Chan style) until an approaching sandstorm forces them to call a truce. 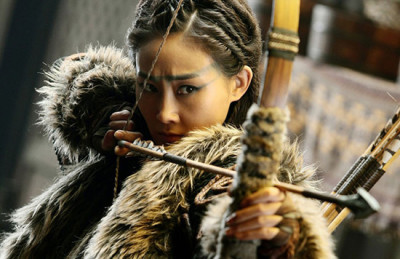 Huo An allows the Romans into the city and the next thing you know, not only are he and Lucius friends, but the Romans show some remarkable construction abilities. On breaks from work, Chan’s squad workout, performing katas, while the Romans counter by showing off their particular battle skills – followed by a couple of one-on-one sparring sessions with each side winning one and earning other’s respect (the exclamation ‘That was a great fight!’ is heard).

Then we learn Lucius’ backstory and why his legion is traveling with a boy named Publius (Jozef Waite) – and, of course, it’s because another roman general, Tiberius (Adrian Brody), tried to kill the boy, his brother, to put himself in place to inherit great power.

It’s important to note that Huo An has been keeping peace on the Silk Road for some time – keeping some thirty-six nations at peace on the road, so it feels natural that he would wind up befriending Lucius.

It’s also inevitable that there will be a betrayal leading to an equally inevitable final battle.

Written and directed by Daniel Lee (Black Mask, White Vengeance), Dragon Blade is an ambitious epic that exploits Cusack and Chan’s dramatic chops as well as Brody’s melodramatic ones. Because of the edits for North America, it’s difficult to say how well the film is directed as a whole – the edits cause some problems with coherence – but most of the narrative moves well and allows the cast to give decent to excellent performances. 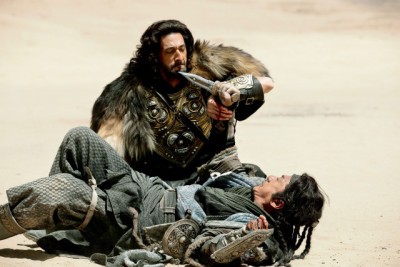 Chan’s action sequences are energetic and witty – even in the most serious, dramatic encounters – right up to the final showdown. Cusack and Brody clearly do more of their own stuntwork than one would expect and the integration of their stunt doubles into the action, when necessary, is seamless.

There are moments that meant to be inspiring – Huo An singing a song about turning foes into friends and Publius countering what could be a Roman anthem; Huo An speechifying when things look bleak (you can tell Chan didn’t write the speech, it’s not terribly overbearing); the arrival of reinforcements – but mostly, Dragon Blade is a fusion of spear & sandal and martial arts movies.

I’m not sure why Dragon Blade was edited down for North America; 126 minutes isn’t exactly long compared to a lot of our blockbusters. The edited version – with its jumps and moments of incoherence – is a lot of fun, but now I want to see the original cut. That might just be even better.

If you love martial arts movies or spear & sandal epics, you won’t have a problem with the plot gaps and the action is definitely worth paying to see. As end of summer entertainment goes, it’s great fun – even if it’s not a great movie.