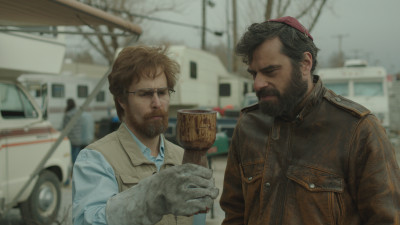 Don Verdean is a very peculiar movie – as are all of Jared Hess’ films (see: Napoleon Dynamite, Nacho Libre, Gentleman Broncos). If you’re not on his wavelength, chances are you will hate Don Verdean; if you loved his previous work, you will love Don Verdean. It’s just that simple.

Don Verdean, the character, is a self-styled Biblical archaeologist who has built his career on finding artifacts that prove the Bible is true. After a lean period, he begins to message the truth – with all good intentions – and slowly finds his life spiraling out of control.

Verdean (Sam Rockwell, Moon, Seven Psychopaths) has spent his professional life searching for (and finding) physical proof to support the Bible but is, of late, reduced to living in an old RV and giving lectures to faith groups – making a humble living from speaking fees and selling his books and DVDs.

With his business manager, Carol Jenson (Amy Ryan), he’s spent a lot of time on the road but now he’s been offered financial backing from The Lazarus Fellowship, a Christian church founded by Tony Lazarus (Danny McBride, Eastbound & Down), a sinner whose near death experience – while in the company of a hooker – inspired him to change his ways… and marry the hooker, Joylinda (Leslie Bibb, Crossing Jordan, The League).

With The Lazarus Foundation losing members to a new congregation headed by a former Satanist, Dennis Fontaine (Will Forte, Last Man on Earth, Nebraska), Lazarus needs some physical evidence to woo the current membership and bring in younger people.

Verdean has an Israeli colleague, Boaz (Men in Black 3, What We Do in Shadows) to ship a pillar of salt he claims to be the remains of Lot’s wife, to Lazarus’ church – but no sooner than the pillar is there, Lazarus wants him to go after something else – Goliath’s skull. 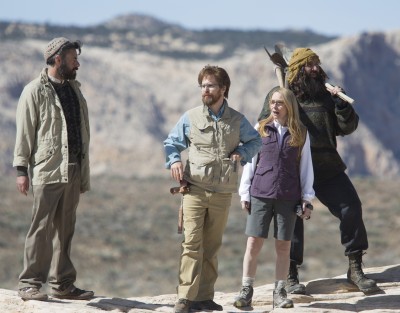 With no research on a possible location, Verdean fakes the skull with a deceased sufferer of gigantism’s skull – which leads to complications with Boaz (who uses his knowledge of the fakery to blackmail Verdean) and his life begins to crumble.

Written by Jared Hess and Jerusha Hess, Don Verdean is a deadpan, slow motion farce. Like Napoleon Dynamite, it moves at a leisurely pace and requires an audience to be appreciative of odd mix of deadpan, slapstick and melancholy.

Verdean is a classic forest for the trees guy – he’s so wrapped up in his calling that he completely fails to see that Carol is in love with him until Boaz points it out a part of his own interest in her. He is even able to rationalize his initial fraud by thinking that it will bring more people to salvation – but once on that path, his own best intentions are what cost.

Carol is a lovely character – even tempered, patient, forgiving – she embodies the best of Christianity and is the foundation on which the film stands. When she finally loses her temper, we know she is way past the point of justification.

Clement makes it plain to the audience from the first moment we see him that he’s lazy, unmotivated and unscrupulous. He’s not quite smart enough to realize how stupid he is.

As a film, Don Verdean is rough around the edges, but filled with subtle character detail that plays well against the deadpan comedy. It’s genial enough and never loses its faith even as it satirizes certain kinds of believers – while giving the perfect example of what they should be via Carol.