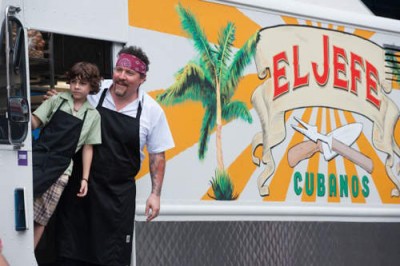 Director/writer Jon Favreau has returned to independent comedy with heart and passion. Without question, every syllable, every frame, and every musical note of Chef feels like a recipe conjured up by Favreau composed of his favorite ingredients. In keeping with that theme, Chef doesn’t deliver one flavor profile, but several, as Favreau navigates between high-brow humor, low-brow humor, and deep character development. The result is a touching, and often laugh out loud funny story of a man trying to connect with his son, while also reminding himself of a passion he knows he has lost. On the whole, Favreau successfully accomplishes what he set out do—entertain while relaying a topic clearly personal to him, being the person you want to be, through the medium of the culinary arts.

Broadcasts of people making, describing, and consuming food have an incredibly difficult obstacle to overcome. Their purpose is to make audiences believe that a sensation of absolute deliciousness exists in food which, in that moment, is impossible for them to experience. An aspect of Chef that could easily be overlooked is Favreau’s ability to portray the creation, and tasting, of his culinary concoctions with not only incredible accuracy, but also a passion that will undoubtedly leave patrons with their mouths watering, and quickly seeking out the nearest location of a Cuban sandwich.

Favreau also wisely surrounds himself with fantastic talent on screen. In particular, John Leguizamo plays Carl Casper’s (Favreau) unflappably optimistic and loyal friend, offering a constant ray of sunshine to the chef’s melancholy state. Furthermore, young actor Emjay Anthony more than holds his own as Casper’s son, Percy, a boy who has unwavering love for his father, and desperately wants to be a part of his world. Anthony portrays Percy with a refreshing sense of honesty, and breaks free of the archetype of boy in a strained relationship with a parent, replacing typical awkwardness with genuine love and in many instances, a remarkable comedic talent. 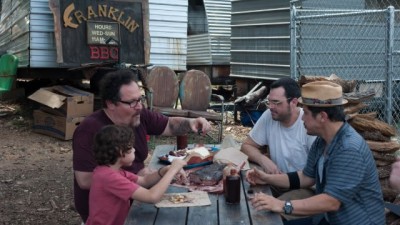 Chef ultimately falters in its pacing, by both extending certain sequences too long as well failing to applying some leveling to the overall tone. Certain jokes and interactions continue on far too long, to the point of either awkwardness, or worse, a major distraction and detraction from the overall narrative. In other instances, Favreau appears to be trying to juggling too many themes and messages at the same, and simply can not find the space in his two-hour long film to wrap up all the loose ends and character story arcs. To use an flying narrative, audiences may begin to wonder when the plane is going to begin its descent, only to find they are suddenly ground, coming to a bumpy stop. Chef, as such, ends unusually abruptly, and perhaps a little too neatly, making the conclusion feel rushed and somewhat out of place.

For its faults, Chef does provide some wonderful moments of comedic entertainment, and while Favreau may have gotten a little too caught up in the details, he does make those details shine bright.