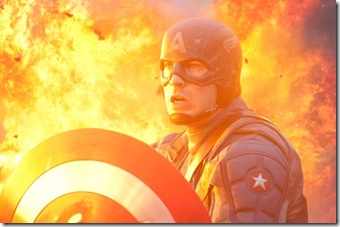 If Thor was Marvel’s Superman: The Movie, then Captain America: The First Avenger is its Raiders of the Lost Ark!

There are fresh twists, too – like Peggy Carter [Haley Atwell], an agent of an organization that is the forerunner of S.H.I.E.L.D., from the Iron Man and Thor movies; Steve’s best friend, Bucky Barnes [Sebastian Stan] is the same age as Steve; Cap puts together the Howling Commandos [Sgt. Nick fury’s squad in the comics]; the Cosmic Cube [see the tag/stinger at the end of Thor] is folded into the story [though here it’s called the Tesseract], and Cap’s skintight costume appears only in a propaganda act he does with the USO to sell war bonds. There’s even a neat weaving of the Iron Man movies into the proceedings, with Howard Stark [Dominic cooper – who bears a more than passing resemblance to Robert Downy Jr.] being one of the scientists on the Super Soldier Project. 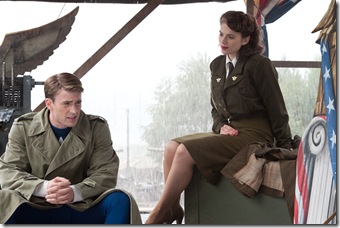 The villains are, of course, Nazis, or rather, the Nazis’ deep science division, HYDRA – and their leader, Johan Schmidt, aka The Red skull [Hugo Weaving], has decided that Hitler’s too much of a wussie, so he’s going to replace him as the ruler of the ruler of the world. In a wink to the comics, Schmidt’s right hand man is Dr. Arnim Zola [Toby Jones], who has a destiny hinted at in one shot that will have comics fans laughing.

For all its nods and winks to the comics fans, Captain America: The First Avenger is first and foremost a ripping action flick that is, after Iron Man, the best Marvel superhero film to date. It has a less convoluted plot, but there’s always something going on; it’s a period film in the same way that Raiders is – it captures the feel of the appropriate period but could have only been made now; its hero is a good man first and a superhero second; it is both grand in its scope and intimate in its characterizations of its main characters, and most of all, it’s just plain fun from beginning to end.

Chris Evans plays the earnest, good-hearted Steve Rogers perfectly. As a skinny, 4F kid, he keeps trying to enlist in different locations and despite being turned every time, he keeps trying. When a loudmouth yammers through a newsreel, he tells the big oaf to shut up – taking a beating for his trouble. When Dr. Abraham Erskine [Stanley Tucci] gives him his chance, he’s so grateful that if he was a puppy, he’d be wagging his tail. Then, after he’s become the first and only super soldier, somehow he remains the same kid from Brooklyn, only taller. 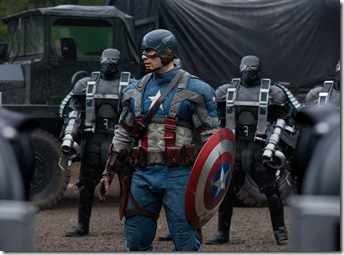 I read, somewhere, a statement to the effect that Hugo Weaving should play every villain in every movie, and I can see that. He’s so good at being bad. Schmidt/The Red Skull gets lines that could easily have come from one of his appearances in the Captain America comics of sixties or seventies, and makes them simultaneously chilling and funny. A product of a Nazi attempt to put Erskine’s process to use, his development speaks to a side effect that Erskine mentions to Cap – the process magnifies the qualities of those it changes. They don’t just become bigger, stronger and faster, they also become more courageous, compassionate, evil, or nasty. Thus, Captain America on one hand and The Red skull on the other.

Other than the presence of Howard Stark, and the Tesseract/Cosmic cube, Captain America: The First Avenger stands on its own as a remarkably good adventure flick. As a long time fan of Captain America, I found the movie to be practically flawless [I’m seeing it again, today, and will likely see it at least one more time before its run ends].