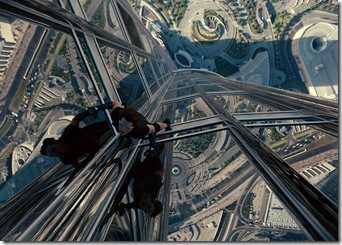 Brad Bird is best known for genre stretching animated films – Iron Giant, The Incredibles, Ratatouille – so it makes perfect sense that he would bring the same panache and wit to his live-action debut. Mission: Impossible: Ghost Protocol is the best film in the series because it cuts all the unnecessary chitchat and focuses on the action, the cool toys and a truly whimsical sense of humor.

From the opening sequence, filmed in IMAX, Ghost Protocol leaps and bounds to its stunning conclusion propelled by a combination of mind-staggering stunts, brief but effective emotional beats and more cool high-tech toys than any of the previous MFI missions.

It begins with an agent named Hannaway [Josh Holloway] being pursued over rooftops and, eventually, being shot by a blonde assassin [Lea Seydoux] – who grabs a file he was carrying and flees. The file contains the key to obtaining firing codes for Russian nuclear weapons; and with Ethan Hunt [Tom cruise] being sprung from a Russian prison by his team – Benji [Simon Pegg] and Jane [Paula Patton].

Ethan Hunt and his team are ordered to infiltrate the Kremlin and steal the Russian equivalent of The Football, but are beaten to it by a mysterious terrorist called Kobalt [Michael Nyqvist, the Swedish The Girl With The Dragon Tattoo]. Kobalt is thorough – he makes it seem as if the IMF team stole The Football and destroys a quarter of the Kremlin with a bomb. Hunt’s team is, of course, blamed for it. From there Hunt’s team is disavowed and must prevent Kobalt from starting a nuclear war with no outside help. Like the poster declares: No Plan; No Backup; No Choice!

Just to make things interesting, the three are saddled with an analyst, Brandt [Jeremy Renner] and a Russian bloodhound of an agent, Sidorov [Vladimir Mashkov] – which a sly touch of Les Miserables to the proceedings.

What follows is a globetrotting rollercoaster of a ride that moves from Russia to Dubai to Mumbai – and involves arms dealers, an incredible stunt atop the Burj Khalifa, the hotel that is the tallest skyscraper in the world [twice the height of the Empire State building], and an Indian playboy [Anil Kapoor, Slumdog Millionaire]. 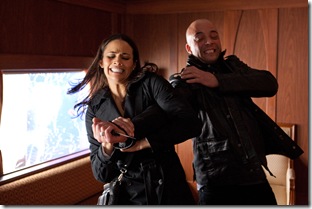 Between the toys and the stunts, Ghost Protocol also exhibits a surprising amount of whimsy. I counted more than half-a-dozen homages to other spy tales including James Bond and Get Smart – all throwaway gags that pass in the blink of eye, but add a layer of fun to the already absorbing events of the film.

But the whimsy doesn’t end there. Ghost Protocol plays a high-speed, high-tech riff on one of the coolest moments from the first film the series – and gives some cool shoutouts to characters from previous chapters.

The cinematography is pretty spectacular – the IMAX sequences are breathtaking [in one sequence, especially, literally, at least for the characters involved. Robert Elswit’s work is worthy of award season recognition [but probably won’t get it].

Some of the film’s best humor involves Benji, as you might expect – but it’s more a result of his promotion to field operative than for his high-tech moments [though there more than a few of those]. He makes an… interesting field agent.

Jane provides most of the heart of the film – Hannaway was more than just a fellow agent to her – and the result is a terrific brawl between her and the assassin, whom we learn is called Sabine Moreau. Not all the heart – Brandt has a secret that provides a bit more, and there’s a really sweet moment for Hunt at the film’s conclusion that adds a little extra bit as well.

If Ghost Protocol seems to verge on becoming a live-action cartoon at times, it’s probably because director Bird was able to translate such an intriguing wealth of over-the-top stunts – stunts that would not be out of place in an Incredibles adventure – so fluidly into the film. But he’s built enough character moments into the stuntwork that it never quite crosses that line.

Mission: Impossible: Ghost Protocol is the best action movie of the year – and just a plan terrific movie, period. It’s worth every penny of the IMAX ticket price.

P.S. Watch the BMW prototype that looks like a lightcycle from TRON. Way cool!