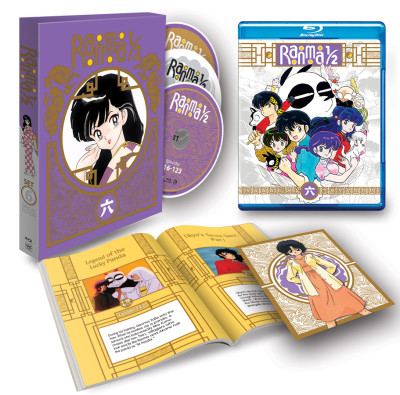 A young man who uses pantyhose as a weapon; monsters coming to life from wall hangings – and a hero who changes genders when splashed with cold water.

It can only be the Ranma ½ Limited Blu-Ray Box Set 6 – coming to stores on June 2nd (also available in a standard DVD version). For details, follow the jump.

San Francisco, CA, May 19, 2015 – VIZ Media, LLC (VIZ Media), the largest publisher, distributor and licensor of anime and manga in North America, prepares a fresh round of RANMA ½ anime episodes for home media release in crisp high-definition with the debut of RANMA ½ Set 6 on June 2nd.

Blu-ray bonus features include clean openings and endings as well as series trailers and special “We Love Ranma Part 6 – We Love Working on RANMA ½” and “We Love Ranma Part 7 – We Love Bloopers” segments. The set comes in a gorgeously illustrated chipboard box with embossed foil stamping.

The RANMA ½ Standard Edition DVD Set 6 also features 23 episodes with the original, un-cropped 4:3 aspect ratio, with bonus features that include clean openings and endings and trailers. Subtitled and English dubbed dialogue options are available. The Standard Edition DVD set is available with an MSRP of $44.82 U.S. / $51.99 CAN.

The mayhem continues in RANMA ½ Set 6! A mysterious young man who uses pantyhose as a weapon steals the Jusenkyo guestbook and kidnaps Akane. In order to save her, Ranma teams up with Ryoga, Mousse, and Shampoo, but the young man, like Ranma, also undergoes a transformation when splashed with cold water! After that, monsters escape from strange hanging scrolls and cause chaos around town! The only way to stop them is for Ranma to go on a date with a scribbled panda that has also come out of a scroll! Finally, Ukyo stays at the Tendo Dojo to recover from the shock of a ruined okonomiyaki sauce that has been marinating for ten years. Could Ranma, who is acting strangely kind around Ukyo, have something to do with that too?