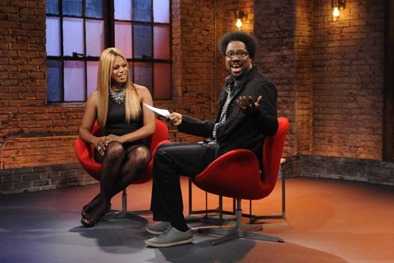 While everyone is talking about Arsenio Hall’s return to the talk show biz – and while the chatter about the shift from Leno to Fallon carries on – there’s a guy named W. Kamau Bell, who’s quietly become one of the best talk show hosts in the country. His nightly show, Totally Biased with W. Kamau Bell, has a knack for getting unexpected guests and he has a knack for conversing with them – which makes him a direct successor to the great Tom Snyder – and he’s having fun in the process.

Because Totally Biased is on FX’s start-up FXX, Bell can – and does – go to interesting places on a nightly basis. Last night he talked about a couple young men of color who thwarted a kidnapping in Texas; featured an encounter between an Indian-American comic and the world of Steampunk, and interviewed Orange is the New Black’s Laverne Cox, the first transgender person of color to win a featured role on a TV series. In short, Bell eats controversial for breakfast (or at least a bedtime snack!).Check out the clips after the jump and see what I mean. Totally Biased with W. Kamau Bell airs nightly at 11/10C.