Lord knows I’m not one who believes movies should be like booksbut watching this movie in the comfort of my own home reaffirms my contention that this is the absolute worse book to movie adaptation I’ve ever seen. I don’t even like the Half Blood Prince book, so I was really hoping they’d take some liberties to improve upon it. I’m not going to try not to rehash my movie review from earlier this summer, but I will say this: this is one dark, drab, dreary, ugly looking, half assed shot movie and the hi-def transfer doesn’t help it at all. 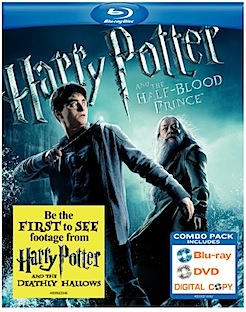 END_OF_DOCUMENT_TOKEN_TO_BE_REPLACED

Ok, The CW is really starting to tick me off. It’s as if I’m living in the early 90s when Networks thought it was a fantastic idea to film 20 episodes of a show and then stretch them out over the course of 8 or 9 months. What the buck (I’m trying to cut back on my profanity) is going on? They had a long break between December to February, came back aired 3 weeks worth of new episodes, went away again for several weeks came back and just aired 2 weeks in a row of new stuff and now they are on break AGAIN??? What the heck. This is crap, all of their shows are based on momentum and they aren’t good enough to keep screwing around with people. I’ve already completely lost interest in 90210, One Tree Hill and now Gossip Girl. I’m finding it hard to stay hooked on Supernatural and Smallville both of which have been really strong this season but the scheduling is frustrating the heck out of me. I’m ready to give up on The CW completely and just watch everything on Blu-ray. It’s been my goto Network but I can take so much of these annoying repeats – especially when they repeat episodes that aired just a few freaking weeks ago! And why is 90210 on Tuesday AND Wednesday repeating the same episode. As it is, I seriously doubt I’m going to return at all if there’s yet another break. Just run the shows in order and plan for mid-season replacements like any other normal network. Who is running this station? A trained monkey could do a better job.