Full event details after the jump!

END_OF_DOCUMENT_TOKEN_TO_BE_REPLACED 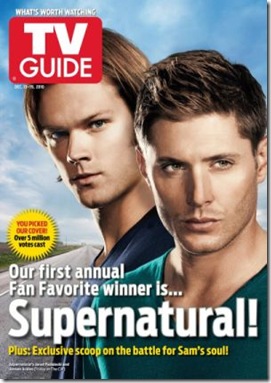 Season six of the hit CW Network action series, Supernatural had a ‘decided at the last’ minute one week delay in coming off it’s holiday hiatus. So this Friday, February 4th the brand new episode titled ‘Like a Virgin’ will be airing at 9 PM EST. Having seen a preview of this episode, I can say that as viewer of Supernatural, I feel the episode is every bit worth the wait.

While fans and viewers had that extra week to wait, this Eclipse Magazine reporter caught up with Debra Birnbaum, who has been the editor-in-chief of TV Guide Magazine since 2008. It was Birnbaum who came up with the ambitious idea to have TV Guide Magazine host its first ever ‘Fan Favorite on the Cover’ poll. The culmination of that poll took Supernatural and its stars Jared Padalecki and Jensen Ackles into virgin territory for the series: the honor of gracing the December 13-19, 2010 TV Guide cover as the first ever fan favorite poll winner no to mention the first time on the TV Guide cover for Supernatural!

All of the fans and viewers of Supernatural know that the cover turned out gorgeous and we were proud of our ‘boys’  winning that coveted spot. But this viewer was curious about how the cover did and what it meant to TV Guide Magazine. So read on as I touch base with Debra Birnbaum on this topic.