END_OF_DOCUMENT_TOKEN_TO_BE_REPLACED

Wednesday evenings on A&E just got a little bit stranger. Steven Seagal: Lawman [10/9C] is a reality series that focuses on action movie hero Seagal’s day job as a deputy sheriff with the Jefferson Parish, Louisiana’s Sheriff’s Office – he’s been a police officer for the last twenty years. 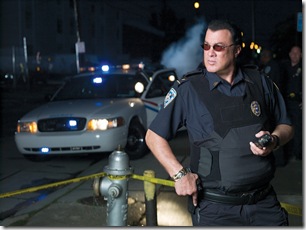 If you’re thinking that the series sounds like Cops with a movie star, you’re partly right – the show’s patrol footage is very like that of the Fox reality show. The difference is twofold: first, until now, Seagal has kept his police job out of the limelight and, second, between the patrol sequences, you get footage of Seagal lending his martial arts expertise to the training and protection of Jefferson Parish police.