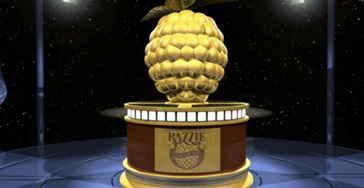 It’s official – After Earth was not the worst movie of 2014. Nor were Grown Ups 2, The Lone Ranger or A Madea Christmas. Little known and less seen Movie 43 took that honor, also providing its directors with a one-thirteenth share of the award for Worst Director. Movie 43 took three Razzies, also nabbing Worst Screenplay. After Earth also had three wins (?): Worst Actor for Jaden Smith, Worst Supporting Actor for Will Smith, and Worst Screen Combo for the father/son combination.

END_OF_DOCUMENT_TOKEN_TO_BE_REPLACED

Hit ‘Play’ above to listen in! Hit the jump to read more about the contents of this awesome show!