Mike Judge makes the movies and TV shows he wants to make. He knows his characters and reveals them to an audience in the same way that we get to know people – prolonged exposure over a period of time. That’s how he made Office Space and King of the Hill, and that’s how he’s made Extract. 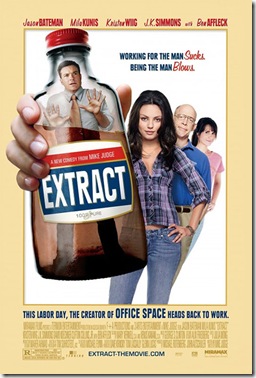 Joel Reynold [Jason Bateman] is the owner of a factory that makes extracts – vanilla extract, cherry extract, root beer extract] – and seems to be enjoying a pretty good life. “Seems” being the operational word, here. Joel hasn’t gotten laid in months. If he arrives home after 8 p.m., his wife, Suzie [Kristen Wiig] has changed into sweats and he’s out of luck.

Then there’s the collection of idiots who work for him – quick to judge, and quick to stop working over various slights, real or imagined. When a jobsite accident floors Step [Clifton Collins Jr.], the most experienced of Joel’s staff, things really slide downhill fast. New employee, and grifter, Cindy [Mila Kunis] soon has Step thinking lawsuit and hiring a real shyster of a lawyer [Gene Simmons] to represent him.

All of this occurs just as it seems that General Mills might be interested in buying the factory for a very tidy sum – leading everyone to decide that they all want a piece of the action. Add passive-aggressive neighbor Nathan [David Koechner], who is always there whenever Joel leaves for work – or comes home; Joel’s friend, bartender and idiot philosopher Dean [Ben Affleck], giver of really bad advice, and dumber-than-a-sack-of-flying-mallets gigolo Brad [Dustin Milligan] and you have a crazy crew that slowly builds to a gut-busting at a funeral.

I haven’t even mentioned the gossiping biddies and Goth rocker-wannabe who work for Joel – or his second-in-command, Brian [J.K. Simmons] who has yet to memorize the names of the factory’s employees.

Extract builds slowly [remember, Office Space wasn’t the fastest-paced movie ever made] but it has its moments as it builds to that moment during the funeral. In that respect – and the fact that Extract is about the boss – Extract mirrors Office Space [which was about the employees]. It’s about people, as opposed to punchlines. The laughs build because we get to know these people.

Extract may not be as funny as Office Space, but before Office Space became recognized as the classic workplace comedy that it is, it got pretty much panned in its theatrical release. Now, it’s considered one of the funniest movies of the nineties. I have a feeling that Extract will play better every time I watch it. For now, though, it’s better than most of this year’s comedies.

ABC’s new animated series, The Goode Family [Wednesdays, 9/8C], is the series from Mike Judge of King of the Hill fame. If it was a tenth as funny as that series, The Goode Family might be worth checking out. Instead, this comedy about the Goode family – vegan, non-confrontational, recycling, hybrid-driving – bends over backwards to balance the family’s save-the-planet sensibilities by making one character an Archie Bunker type. Instead of provoking genuinely spirited exchanges, however, it just renders both sides inoffensive. 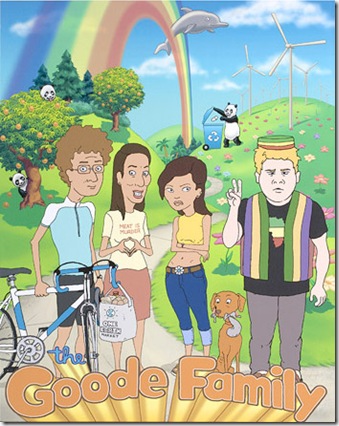 The Goode Family – Gerald [Mike Judge] and Helen and their son Ubuntu and daughter Bliss – live by the simple motto, WWAGD [What would Al Gore Do]. Gerald is a college administrator and Helen a community activist. Ubuntu and Bliss are high school students. The family’s politically correct plans always go wrong – as when Gerald and Helen adopt an African-American baby and one who, though technically African-American [being from Africa] is as white as they are.

Whether they’re trying to put in an organically sound garden [elephant dung from a circus!!!], or find something that the hulking Ubuntu can do competently – besides eat [can you say “football family?”], everything the family does to minimize its footprint on Planet Earth goes horribly awry. Or, at least, that was the plan. Somewhere along the way, the series creators [Judge, John Altschuler & Dave Krinsky] forgot the funny once they got past the white African-American thing. Even the vegan pet dog, Che is a one-gag character.

To say that The Goode Family is boring is being kind. It’s more like the TV equivalent of an MST3K clunker waiting for its commentary track. Spare yourselves – unless you’re suffering from insomnia.