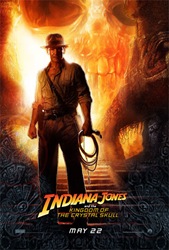 I haven’t done much coverage of the upcoming Indiana Jones film but here’s some interesting news, the teaser trailer debuts in theaters this weekend. Paramount Pictures and Lucasfilm Ltd. announced today that the first teaser trailer for the highly anticipated Indiana Jones adventure “Indiana Jones and the Kingdom of the Crystal Skull,” directed by Steven Spielberg and starring Harrison Ford in the title role, will debut in theaters across the globe on February 14, 2008.  The trailer will air exclusively on ABC’s “Good Morning America” that morning between 8 a.m. and 9 a.m.  Immediately thereafter, the footage will be available at the film’s official site IndianaJones.com, Yahoo! Movies and in motion picture theaters.

On May 22, Indiana Jones is back in a new globe-trotting adventure, "Indiana Jones and the Kingdom of the Crystal Skull."  Directed by Steven Spielberg and starring Harrison Ford as Indy, "Indiana Jones and the Kingdom of the Crystal Skull" is a Lucasfilm Ltd. Production.  The movie features an outstanding cast, including Oscar® winner Cate Blanchett, Karen Allen, Ray Winstone, John Hurt, Oscar® winner Jim Broadbent and Shia LaBeouf.  Frank Marshall is the film’s producer.  George Lucas and Kathleen Kennedy are the executive producers. The screenplay is by David Koepp from a story by George Lucas and Jeff Nathanson.  It’s pretty interesting and ironic that Shia, David and Jeff Nathanson have all talked exclusively with Eclipse in the past and will be featured in the upcoming EM Interview book.