When WALL*E premiered, I described it as follows: “WALL*E is the best film of the year – let alone the summer – so far. Easily.” While that was before The Dark Knight and a number of amazing smaller films came out, this eco-fable/romance between the decidedly blue collar trash compacter on tank treads and the equally decidedly uptown seeker of life is still one of the year’s best films. 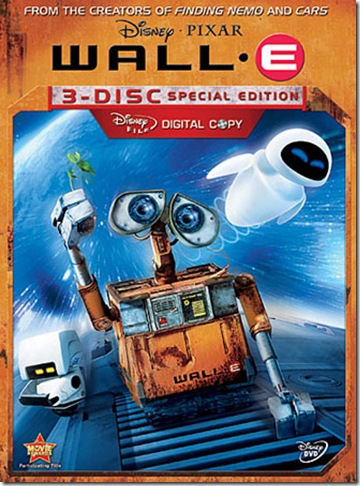 Looking like a Bizarro World hybrid of ET and Johnny 5, WALL*E may be the year’s most unlikely leading man, while sleek, shiny EVE should be far, far out of his league. For some reason, though, the duo have become a classic romantic duo – in spite of their differing backgrounds – and their story plays almost as well on a twenty-seven inch screen as in a theater.

Disc Two: The PIXAR Story, a ninety-minute documentary by Leslie Iwerks; Deleted Scenes [twelve more minutes – with optional introduction by the director]; Behind the Scenes Featurettes [The Imperfect Lens, Captain’s Log, Notes on a Score, Life of a shot: Deconstructing the PIXAR Process, Robo Everything, and WALL*E & EVE]; BnL Shorts [The History of Buy n Large; Operation cleanup; All Aboard the Axiom; Captaining the Axiom, and Meet the BnL Bots]; WALL*E’s Treasures and Trinkets; Lots of Bots [Interactive Storybook & Games].

Disc Three: Digital Copy [for uploading to other media]