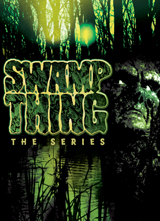 With the WGA strike about to hit the three month mark, and with limited new episodes of our favorite programs remaining [and most done for the year, or at least until late April/early May], here’s a suggestion: try a few cable series that have recently premiered on DVD. Today we’re looking at one of USA’s earliest series, Swamp Thing: The Series, the first season of which – from Shout Factory! – is now in stores.

Back in the ‘70s, a writer named Len Wein teamed with legendary artist Berni Wrightson to create a character unlike anything seen before – a shambling creature that was literally a part of the Louisiana swamp in which he was birthed. It first appeared as a short story in DC’s House of Mystery horror anthology.

A scientist named Alex Olsen [originally] who was apparently killed in a lab explosion by the man who lusted after his wife, Linda. Unfortunately for the would-be suitor, Olsen was revived by a combination of the swamp and the chemicals in his lab – as a perambulating plant with a bit of a temper problem].

The story was so popular that the two were asked to turn it into a regular series. They changed the character’s name to Alec Holland and had him working on a “bio-regenerative formula” that was supposed to enable desert regions to flourish. When his lab is sabotaged and explodes, Holland’s incomplete formula combines with the swamp to create the ongoing character of Swamp Thing.

It is this version [there was another, later version by Alan Moore of Watchmen fame that took a radically different approach – without rendering anything that had gone before as wrong] that was adapted into two low-budget movies – one great [directed by Wes Craven] and the other, not so much. But they did enough box office that USA ordered a series based on the character. 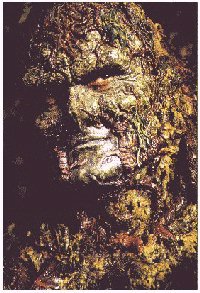 The origin of the character remained the same, though it wasn’t shown on camera. For television, though, changes were made to the format. Gone was Linda, who had been killed years before. In her place there was divorced mother Tressa Kip [Carrell Myers, who looks a lot like Gillian Anderson]] and her son, Jim [Jesse Ziegler] who had returned to visit her mother and helped prevent her property from falling into the hands the bank by finding her real will – aided by Swamp Thing [Dick Durock, the only actor to play the character], who formed a bond with young Jim.

The series ran for seventy-two episodes over three seasons. The DVD release, simply entitled Swamp Thing: The Series, contains the twenty-two half-hour episodes that comprise the first season. Swampy is “the spirit of the swamp” and always on the lookout for the results of experiments of the evil Dr. Anton Arcane [Mark Lindsay Chapman] – whose efforts to replicate Holland’s bio-regenerative formula [in order to revive his dead wife, Tanya], create an unholy number of grotesque mutations [which he pays a local freak show to house].

Thirteen eps in, Arcane sends Jim of to slavery in South America, but the show carries on – as if Jim had never existed [I’m told that he was mentioned in a couple of later eps, but not during the first season]. His place in the cast was taken over by his half-brother, Will [Scott Garrison] – and yes, the boys’ father does turn up before the end of the season. 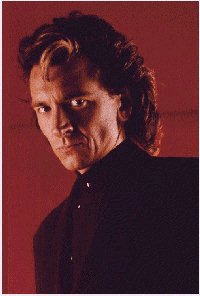 Even with the titanic glitch in continuity – if you can call it that – and the cheesy mutants, the show was extremely entertaining and, certainly, darker than the usual TV-superhero. When watching the series, it is important to note that each ep cost half [or less] of what a broadcast equivalent would have cost. Given the show’s financial limitations [and the fact that they shot a complete ep every four days], it’s impressive that the show’s writing [which attracted guest stars like Roscoe Lee Browne, Summer Phoenix, Peter Mark Richman, and Sandahl Bergman], directing and performances were usually better than average.

I hope it does well enough to prompt Shout Factory! to release the remaining fifty eps.

Grade: Swamp Thing: The Series [as this first season set is labelled – B+