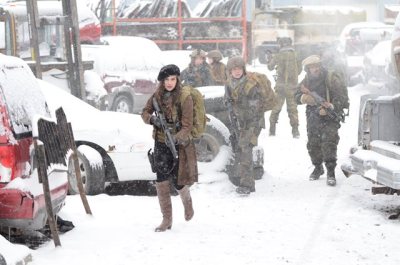 The film, which had its world premiere at the Calgary International Film Festival last month, is about a group of survivalists who emerge from their bunkers after ten years to find the world overrun with hideous mutants.

NEW YORK – October 28, 2014 – A group of survivalists – led by Kim Coates (Sons of Anarchy) and Holly Deveaux (Hannibal) – emerge from their bunkers 10 years after an apocalyptic meteor strike, only to discover the world is overrun with crazed mutants, in the new Syfy Original Movie Mutant World, premiering Saturday, November 8 at 9PM (ET/PT).

Trying to survive through the terrible nights, they meet a mysterious traveler – singer Ashanti (song Foolish) – who claims a safe haven exists, but to reach it they first have to prepare for all-out war.

Mutant World is a production of Nomadic Pictures (Fargo, Hell on Wheels, Broken Trail) and is executive produced by Chad Oakes and Mike Frislev, who founded Nomadic Pictures in 1995. As co-chairmen of Nomadic, they have produced, financed and/or co-financed over fifty-seven film and television projects.

Syfy is a media destination for imagination-based entertainment. With year round acclaimed original series, events, blockbuster movies, classic science fiction and fantasy programming, a dynamic Web site (www.Syfy.com), and a portfolio of adjacent business (Syfy Ventures), Syfy is a passport to limitless possibilities. Originally launched in 1992 as SCI FI Channel, and currently in 96 million homes, Syfy is a network of NBCUniversal, one of the world’s leading media and entertainment companies.  NBCUniversal is a subsidiary of Comcast Corporation.(Syfy. Imagine Greater.)