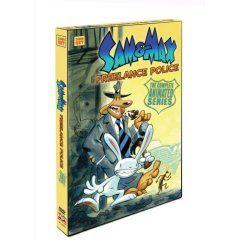 Twenty years ago, or so, a gentleman with a decidedly warped sense of humor, named Steve Purcell, produced the first issue of a comic that was soon to become a minor classic: Sam & Max: Freelance Police. A decade later, the title had become a franchise of sorts, with video games and a truly unique animated TV series. Now, that series is available on DVD for the first time. “Holy jumpin’ weasel fritters on a hot cross bun” does not even to begin the joyous madness contained therein!

For one glorious season, back around 1997, FOX-TV aired Sam & Max: Freelance Police. As creativity goes, it was right up there with such efforts as Ralph Bakshi’s version of Mighty Mouse and the animated version of The Tick. The oversized, anthropomorphized Sam [a big dog in suit, tie and fedora] and Max [his bipedal, rabbit-thingy friend] gave chaos and weirdness a face – a face that appealed to children and adults in equal measure.

From its blistering acid jazz theme [right up there with that of The Tick for feeling like posthumous efforts by a mellower sun Ra], to its matter of fact episode titles – sandwiched between The Thing That Wouldn’t Stop It and The Final Episode were such wonders as: The Second Show Ever; Dysfunction of the Gods; Aaiiieee, Robot and Little Bigfoot – the short-lived series [all fourteen eps are here] brought rays of sunlight and mayhem into our pleasure starved lives.

The show was smart [parodies of Asimov, horror movies and Apocalypse Now stood side by each with evil Howdy Doodys and marriage counselling for Greek gods], funny [“That’s the first time I’ve heard the words bowels and funhouse in the same sentence”] and completely off the wall [Sam and Max’s continuing battles to see who would get to answer the phone when the Commissioner called]. The pacing was revved up to super-anthropomorphized animal levels and the series design was as cracked as the rest of the material. 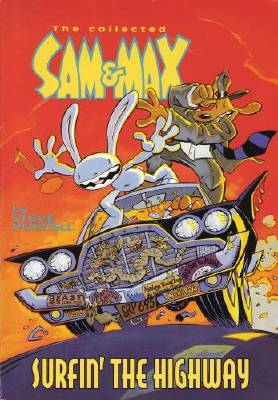 When eps came in short, there little fillips of skits [The Vice Squad – the show about crushing things in your father’s vice] that were frequently funnier than their regular adventures [and that’s pretty darned funny!]. And then there were the Easter Eggs [in an ep that parodies monster movies, a downcast monster gazes sadly at a sign that reads, “You must be this tall to attack Tokyo] – frequently onscreen for less than a second, but now available to be caught with your pause button.

Why is the series so good? Probably because [and I’m paraphrasing creator, Steve Purcell here] as a kids show, they had to dial back the violence but they could cut loose with the weird. As we all should know by now, kids [of all ages] love the weird!

In my library, Sam & Max: Freelance Police takes a place of honor beside The Tick in the most totally wicked animated series section. I’ve only watched it twice through [including the bonus disc], but that’s because I have to watch other stuff, too.

And speaking of bonus discs, this is what you get there: A Comic conversation with Steve Purcell [likely taped at Comic-Con]; Three Animated Shorts [originally seen on FOX Kids]; Sam & Max: Our Bewildering Universe; Telling the Tale of Telltale Games [who are responsible for the equally lunatic Sam & Max games]; Sam & Max: Ice Station Santa [playable Telltale Games demo]; The Original Series Bible, Original Concept Art Galleries, and new box and sleeve art by Steve Purcell.

Grade: Sam & Max: The Freelance Police – The Complete Series – A+