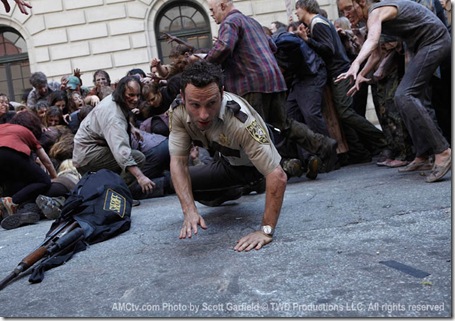 A police car pulls into what seems to be an encampment of some sort and a man in uniform gets out, holding a gas can. He walks through the encampment until he spots a young girl [from behind]. When he calls to her, she turns to face him – and he sees that she is partially decomposed. Drawing his sidearm, he shots her in the head. Roll opening credits. Welcome to The Walking Dead [AMC, 10/9C].

Fade in on sheriff’s deputy Rick Grimes [Andrew Lincoln] and his partner, Shane [Jon Bernthal], discussing the difference between men and women when a call comes in sending them to help deal with a chase – the end result of which is Grimes, shot twice, losing consciousness as fellow officers rush to his aid. In a following moment of semi-consciousness, he sees Shane bring in some flowers.

Cut to Grimes, waking up to discover that the flowers are long since dead – and the wall clock in his ward has stopped [at 2:17, if it matters]. He stumbles into the hall and finds the place empty – except for sounds coming from a chained, padlocked and barred door which has ‘Don’t open. Dead Inside’ painted on it. White [almost fungal] fingers force the doors apart just enough poke through and discover the chains. Grimes flees. The world is no longer the relatively sane place it was before he was shot.

Based on a series of graphic novels by Robert Kirkman, The Walking Dead is AMC’s newest drama and, given how few they have[Mad Men, Breaking Bad, Rubicon] – and how well developed they were before AMC committed to them – it has a lot to live up to. Based on the ninety-minute premiere, adapted by Frank Darabont [The Shawshank Redemption, The Green Mile], it does.

Most of the premiere is concerned with Grimes and his discovery of how the world has changed – aided by Morgan Jones [Lennie James] and his son, Duane [Adrian Kali Turner] – though they don’t get off to a good start. In passing, this section refers back to Grimes and Shane’s discussion – while Morgan packed survival equipment, his wife packed up family photo albums…

Darabont wrote and directed the premiere – and is showrunner for the series – and it seems that he has latched on to the concept of people attempting to retain their humanity in the face of a world that mostly doesn’t recognize that anymore [since I have not read the graphic novels, I can only assume that that’s one of the major themes in them, as well]. In Grimes’ faith that his wife, Lori [Sarah Wayne Callies, Prison Brake] and son, Carl [Chandler Riggs] are both still alive [see packed photo albums], he also seems to be setting Grimes up as a classic hero. What he will experience on his quest to be reunited with his family will undoubtedly have Campbellian overtones.

Following Morgan’s advice, Grimes heads for Atlanta, where there’s supposed to be a place to stay, complete with food and military protection. We also meet a small group of survivors that includes Shane, Lori, Carl and a few others. These characters are sketched in in broad strokes, but you can be sure that we will learn much more about them. 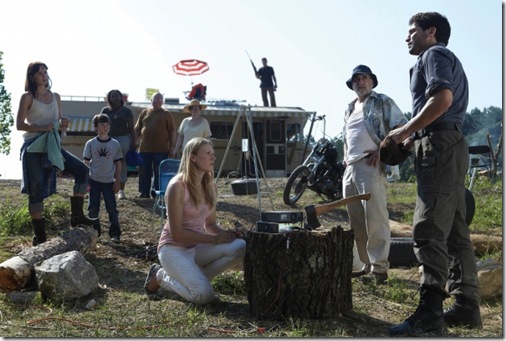 The Walking Dead premiere is paced almost exactly the same as George Romero’s original modern zombie film, Night of the Living Dead – except for brief beats of action; it moves a deliberate pace, letting us absorb the contrasts between the living characters and the undead ones. Morgan’s wife shows up and it is horrifying to see her trying to figure out where she is and how she got there. On the other hand, Lincoln’s Grimes is cut from the same cloth as characters we’ve seen played by Gary Cooper –quiet, strong-willed and willing to move heaven and earth for the things/people they believe in.

Darabont’s script is heavy on close-ups and wide shots. In the close-ups he seems to be boring into his characters’ minds; in the wide shots, he uses a mix of quiet pastoral beauty and empty town and city areas to contrast the beauty of nature with the waste and self-destructiveness of human beings.

He front loads the premiere with a couple of quick shocks before moving into that deliberate pace that allows us to get inside Grimes’ and Morgan’s heads. Although he also uses these scenes for exposition, it seems more like we’re getting to know these guys than we’re getting the capsule info dump on Zombies 101.

Greg Nicotero, from more horror movies than you can count, provides the practical zombie effects and they are both gritty and grimy [and stomach wrenching], they are disturbingly real. Clearly Darabont and AMC were not about to do the series on the cheap.’

The end result is a series that acknowledges Romero and other accomplished zombie movie-makers [James Gunn, Dawn of the Dead, Slither; and Zack Snyder, Dawn of the Dead], 30 Days of Night [David Slade], without remaining slavish to them. It can be taken in any number of ways [just like a Romero flick] – Cancer, for example [it’ slow to establish itself and then, at some point, takes over; Humanity’s penchant for self-destruction [do the words “to big to fail” ring a bell?].

The thing of it is that The Walking Dead is whip smart and a match, note for note of quality, with Mad Men, Breaking Bad and Rubicon – and it’s story is being told in classic ways. Despite the violence and horror, The Walking Dead is a perfect fit for AMC. Now all it needs is intelligent audiences who are ready to have the $#!+ kicked out of them on a weekly basis – and keep coming back.