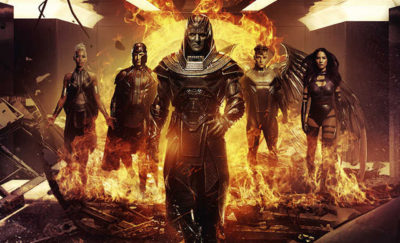 The biggest problem with X-Men: Apocalypse is that it’s the third film in a very successful reboot series and it just goes on and on and on… But at least it’s not X-Men: Last Stand.

X-Men: Apocalypse with a sequence that shows En Saba Nur’s most important power as, in 3600 BC, we see him transfer his conscious into the body of a man (Oscar Isaacs) who has the power to heal himself almost instantaneously. While he’s doing this, a group of supposedly loyal guards destroy the pyramidal temple in which the transference takes place – burying En Saba Nur, but not killing him (a loyal follower uses her abilities to shield him even she herself dies.

Over the next forty-five minutes we meet the movie’s most important characters: Scott Summers (Tye Sheridan) as he discovers his powers in a witty sequence featuring a bully; Alex Storm aka Havoc (Lucas Till), who brings Scott to Professor X (James McAvoy); Storm (Alexandra Shipp), a street urchin in Cairo; Mystique (Jennifer Lawrence), Angel (Ben Hardy) and Nightcrawler (Kodi Smit-McPhee) in an arena where mutants are forced to fight each other as entertainment; Caliban (Tómas Lemarquis), operator of a mutant underground railroad and his bodyguard, Psylocke (Olivia Munn); Hank McCoy (Nicholas Hoult), in non-blue form; Jean Grey (Sophie Turner), in a bizarre-ish meet cute with Scott; and others – but most importantly for the movie, Erik Lensherr (Michael Fassbender) – now working in a steel mill to support his wife and daughter. 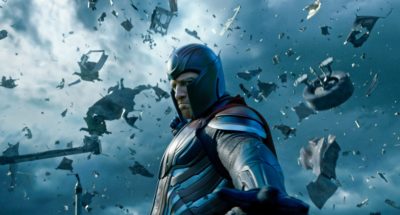 While we get moments with all the main characters, Apocalypse is concerned mostly with Magneto – his origin is restated; tragic events lead to him joining forces with En Saba Nur (who is never actually referred to as Apocalypse in the film) and generally take up a disproportionate amount of the film.

En Saba Nur always gathers four main followers (leading to the Biblical Four Horsemen). In this case, he’s joined by Magneto, Psylocke, Storm and Angel – all of whose powers he maximizes (leading to a very Archangelic look for Angel). We never get to learn another thing about the rest.

The first hour of X-Men Apocalypse is bringing the bands together (bad guys and good). The next hour and twenty minutes are various kinds of havoc wreaking and betrayals; the destruction of Cerebro (the machine through which Charles Xavier follows mutants around the world – but which can put him in touch with any person, mutant or not; and a couple of very entertaining sequences in which Evan Peters’ Quicksilver gets to strut his stuff.

And yes, there’s a revisionist take on how Weapon X aka Wolverine (Hugh Jackman) was freed from the tender machinations of now Col. William Stryker (Josh Helman) – which plays into an important rescue effort (barely escaping being a deus ex machina by the skin of its claws…). 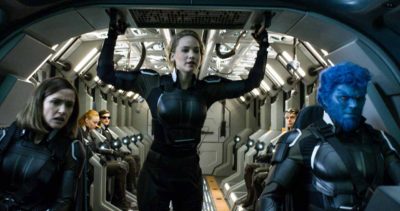 Scripted by Simon Kinberg, X-Men Apocalypse starts slowly and builds up to quite a tempest – but in terms of anything other than action (or non-Magneto characterization); it’s pretty-average-to-pretty-below-average.

There are lots of great effects and makeup (as usual, Mystique looks great as herself, but audiences want Jennifer Lawrence so, mostly, they get Jennifer Lawrence) but there some major flaws to the storytelling. (Note: I can’t comment on the 3D because recent eye surgery compelled me to wear an eyepatch. Arrrr…!)

The biggest is that En Saba Nur has the power to turn anything – persons or things – to dust but does he just zap the X-Men? Of course not. He leaves his Horsemen to do deal with them while he undergoes the painfully slow procedure of transference. His plan? To take over Professor X’s body to gain his powers – especially the mind control one. Which leads to…

Like Alice Through the Looking Glass, X-Men: Apocalypse is too long and too unfocused. While it certainly looks good – and gets some really good performances (Turner makes a very good young Jean Grey, for example) – it’s just too much of a muchness, so to speak. 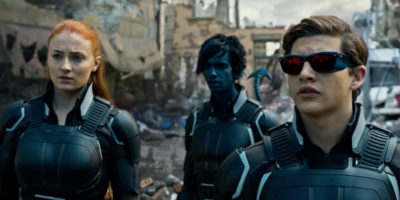 On the plus side, I stopped reading comics before the Apocalypse arc so I had no clue as to what would happen – and director Bryan Singer’s meandering (there’s that word again) direction wasn’t terribly hard to follow. But saying that a film is easy to follow isn’t exactly a rave review.

I wanted more than that.

Hints of the Phoenix arc and a killer post-credits tag with ominous implications suggest that I might get more if there’s a next time – just a wee bit too late.