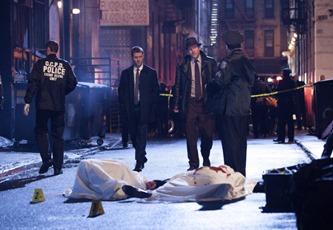 Fox is holding the world premiere screenings of Gotham and Wayward Pines at Comic-Con 2014! Series stars and executive producers will be taking part in the panels at these events.

Another certain highlight will be the Sleepy Hollow Haunted Bridge and Oculus Rift Virtual Reality Experience – and Headless Horsemen will be roaming downtown. Other Fox returnees for Comic-Con 2014 include Bones, Bob’s Burgers, Family Guy, The Following and The Simpsons.

Comic-Con Exclusives include: 2014 Poster Tubes, Collectible Mini-Posters, Gotham Lenticular Collectibles and autographed copies of Pines, the Blake Crouch novel on which Wandering Pines is based, and more. For further details, follow the jump.

FLY THROUGH GOTHAM CITY ON THE EXCLUSIVE “GOTHAM” ZIP LINE

The FOX FANFARE Booth (#4229) will feature an incredible lineup of talent on the convention center floor for star-studded autograph signings and exciting booth activities, including distribution of the exclusive 2014 FOX FANFARE poster tubes, collectible mini-posters, premium giveaways and merchandise sales.

Visit fox.com/comiccon2014 for all the latest FOX FANFARE 2014 information, including daily schedules, breaking news from all of the panels, as well as exclusive videos and photos. In addition, visit www.Facebook.com/FOXTV  for a feed of all live tweets from each panel, FOX talent at Comic-Con and information from the press rooms, as well as the latest new videos.

FOX will create Gotham City for fans to channel their inner superhero by ziplining (130 feet long and 30 feet high) through the GOTHAM city landscape! Following the adrenalized experience, participants will receive a shareable photo of their heroic zip line experience and will be awarded with exclusive GOTHAM prizes. Follow fox.com/comiccon2014 to find out when GOTHAM producers and cast, including stars Ben McKenzie and Donal Logue, will be making appearances at the experience.

For the fans afoot at SDCC who are UBER users, specially-designed GOTHAM police cars will hit the San Diego streets to pick up passengers throughout the convention weekend – for free – via the UBER app, by selecting GOTHAM PD on the UBER “slider.” Inside the GOTHAM-branded cars, passengers will get a sneak preview of special GOTHAM content. Those fans who are new to UBER and who sign up for the app using the code GOTHAMPD will get a free first ride up to $30, wherever UBER is available. Track the GOTHAM “patrol rides” on UBER’s San Diego Twitter (https://twitter.com/uber_sd) and Instagram (http://instagram.com/uber_sd).

DON’T LOSE YOUR HEAD! FOX is bringing SLEEPY HOLLOW back to San Diego with an Oculus Rift fan experience. This virtual reality installation transports the user deep into the heart of Sleepy Hollow where the fans receive an ominous warning from Ichabod Crane and then a terrifying encounter with the Headless Horseman. Participants will receive a personalized, souvenir image to share across their social media pages. Follow fox.com/comiccon2014 to find out when SLEEPY HOLLOW producers and cast, including stars Tom Mison, Nicole Beharie and John Noble, will be making appearances at the experience.

Drop by the FOX FANFARE booth (#4229) daily to pick up the 2014 FOX FANFARE Poster Tube, as well as Exclusive and Collectible Mini-Posters from BOB’S BURGERS, BONES, FAMILY GUY, THE FOLLOWING, GOTHAM, THE SIMPSONS, SLEEPY HOLLOW and WAYWARD PINES, among other FOX FANFARE properties.

Limited-edition giveaways will also be distributed from the booth (while supplies last):

· Collect all THREE of this year’s FOX ANIMATION Bags, featuring:

o “Lisa” from THE SIMPSONS

JACK IS BACK at Comic-Con, DAMN IT! Kiefer Sutherland takes the stage to celebrate 24’s most iconic moments and highlights of Jack Bauer’s triumphant return in 24: LIVE ANOTHER DAY. Catch the exclusive sneak peek at the highly anticipated Blu-ray and DVD featurette, “Worlds Collide,” illustrating how the pulse-pounding storytelling was created for this thrilling new event series, which concludes in a thrilling finale on Monday, July 14 (9:00-10:00 PM ET/PT) on FOX.  Screening and discussion moderated by executive producer Jon Cassar to be followed by fan Q&A and more.

Thursday Autograph Signing at Booth #4229 (time to be announced at SDCC):

Fan favorites David Boreanaz, Emily Deschanel and executive producer Stephen Nathan return to Comic-Con to share secrets from the set, upcoming twists and turns and what’s in store for Booth and Brennan as BONES enters its milestone 10th season.

FRIDAY Autograph Signings at Booth #4229 (times to be announced at SDCC):

Celebrate the 25th anniversary of THE SIMPSONS – no gifts please – with creator Matt Groening, executive producer Al Jean, supervising director Mike Anderson and director-for-life David Silverman. Topics include the new “Treehouse of Horror,” “Simpsorama,” a visit from Homer Simpson and much, much more.

The Griffins are back at Comic-Con with an exclusive sneak peek at the historic FAMILY GUY/THE SIMPSONS crossover episode, “The Simpsons Guy,” in which Peter and clan hit Springfield! Celebrate Season 13 with voice stars Seth Green and Mike Henry, as well as executive producers Rich Appel, Steve Callaghan, Danny Smith and co-executive producer Peter Shin, plus surprise guests.

Warner Bros. Television presents the World Premiere of GOTHAM as part of the studio’s Night of DC Entertainment. Series stars and the executive producers from GOTHAM will make special appearances on the Hall H stage throughout the three-hour event.

SATURDAY Autograph Signings at Booth #4229 (times to be announced at SDCC):

SUNDAY Autograph Signings at Booth #4229 (time to be announced at SDCC):

Please note that tickets for all signings will be available every day at 8:00 AM, for that day’s signings only, at the designated FOX location in the Sails Pavilion. Tickets are distributed via a raffle system and are limited in number. Line-up information and autograph signing times are included on the tickets.

Fans can also receive updated announcements and information from each panel, the press room and other activities throughout Comic-Con, by following these series and joining the conversation by using #FOXSDCC and other hashtags as noted below:

Photo by Jessica Miglio/Courtesy of Fox