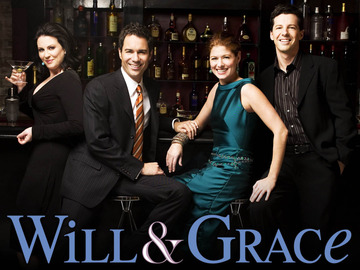 Will & Grace are returning to NBC for a 10-episode limited run.

Will & Grace is slated to premiere during the 2017-18 season. Details follow the break.

NBC is officially bringing back television’s favorite foursome with a 10-episode limited run of “Will & Grace” during the 2017-18 season.

Stars Eric McCormack, Debra Messing, Sean Hayes and Megan Mullally — each of whom received at least one Emmy Award for their respective performances throughout the series — will be back, and original series creators Max Mutchnick and David Kohan will act as showrunners and executive producers. Legendary director James Burrows, who directed every episode of the show during its initial eight-year run, is on board to direct and executive produce.

“We’re thrilled that one of the smartest, funniest, and most defining comedies in NBC history is coming back,” said NBC Entertainment Chairman Robert Greenblatt. “This groundbreaking series for everything from gay rights to social and political commentary — all disguised as a high-speed train of witty pop culture — is coming back where it belongs.”

Jennifer Salke, President of NBC Entertainment, added: “We started talking with Mutchnick and Kohan about producing new episodes right after they shot the secret reunion show back in September, and the fact that all four of the original stars were excited about getting back into production is a testament to the joyful experience they had doing nearly 200 episodes for eight seasons. Few things cut through the clutter these days, especially in comedy, and ‘Will and Grace’ is one of the best.”

Said Mutchnick: “Dave and I are absolutely thrilled about the opportunity to write what Will, Grace, Jack and Karen are thinking about in 2017.”

Debuting in 1998, the show’s popularity climbed steadily, ultimately becoming the highest-rated sitcom in the adults 18-49 demo from 2001-05, and garnering an audience of more than 18 million for its series finale in 2006. In addition to taking its place in the cultural zeitgeist as a critic and fan favorite, “Will & Grace” was nominated for 83 Emmy Awards, winning 16 of them including Outstanding Comedy Series.

Universal Television will produce and distribute the new episodes.