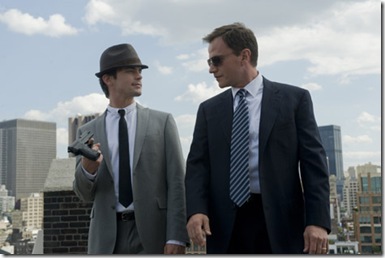 FBI Agent Peter Burke [Tim DeKay] and his con man [and now friend] Neal Caffrey [Matt Bomer] soon figure out a way to track and catch would-be assassin Julian Larssen [Paul Blackthorne] – but Larssen, or whomever he works for, is ahead of them, resulting in Peter being framed for a crime with a well-placed fingerprint.

The result is a suspended Peter having to put together a sting with Neal, a wheelchair-bound Mozzie [Willie Garson], still active FBI Agents Diana Barrigan [Marsha Thomason] and Clinton Jones [Sharif Atkins] – along with sometime competitor, insurance investigator Sara Ellis [Hilarie Burton]. With the group ensconced in Peter’s livingroom and his wife, Elizabeth [Tiffani Thiessen] taking a crucial phone call, the result is the ep’s title: Burke’s Seven.

One of the key elements of the series, so far, has been the tie-in between the music box and its connection to the death of Kate, Neal’s One True Love. In going after Larssen – and whoever is behind him – Peter and Neal are getting closer to figuring out the mystery and finding justice for Kate.

The nature of White Collar is such that it can riff on movies like The Sting, or any and all heist/caper films and TV series. The joy of White Collar is that it continually finds fresh ways to do that riffing. The cast gives every appearance of having as fun as the audience – and the result is show that doesn’t insult the audience’s intelligence, rather it demands it to be at least as smart as it is. At one point, a character quotes a famous line from soap opera spoof, Soap. That’s how smart Jeff Eastin – who wrote this ep – thinks his audience is.

Director Kevin Bray doesn’t just keep things moving at a good clip, he knows when to sacrifice momentum for emotional beats and reveals. Burke’s Seven is an ingenious conclusion to a highly emotional cliffhanger – and it sets up next’s Forging bonds, in which we learn how Neal became the man he is today.