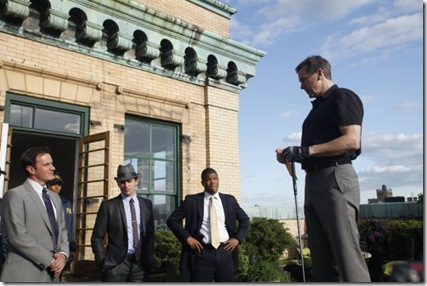 In the first season finale of White Collar [USA, Tuesdays, 9/8C], master con artist Neal Caffrey [Matt Bomer], caught between running away with his one true love, Kate, and giving up the life of a con on the lam, hesitated – and an explosion destroyed his getaway plane, killing Kate.

It’s no surprise, then, that in this evening’s second season premiere, Withdrawal, Neal, once more behind bars [however temporarily], has vengeance on his mind. Fortunately, he doesn’t have break out of jail [again] because good old FBI Special Agent Peter Burke [Tim DeKay] gets him back on the street to help nail a phantom bank robber known only as The Architect.

The Architect is the mastermind of a mere handful of bank robberies – but they are extremely rewarding robberies and flawlessly executed. He is so good at what he does that The Architect announces, well in advance, that he’s going to be striking. This hubris irks both Peter and Neal, so they bow to take him down.

Circumstantial evidence suggests that The Architect is a playboy billionaire named Edward Walker. Problem is, Walker is smart. Burke/Caffrey smart. On the plus side, he’s also arrogant and confirms their suspicions through a series of oblique remarks – nothing that could actually nail him in a court. Remarks that prompt Peter and Neal into a situation where they can be charged with harassment…

Withdrawal also marks the return of Agent Diana Barrigan [Marsha Thomason] who, being gay, is immune to Neal’s considerable charms – with the result that their banter is more friendly adversaries than anything else. She plays a crucial part in the season’s ongoing arc in that she’s helping Peter with his investigation into Kaye’s death – just as Mozzie [Willie Garson] is helping Neal with his investigation into Kate’s death. On that front, neither Peter nor Neal wants the other to know what they’re doing, individually.

And speaking of Mozzie, season two will feature more Mozzie and Withdrawal makes that clear early on, as Peter has a couple of meetings with him to keep abreast of how Neal is doing since Kate’s murder. Garson has more than a few terrific moments in the season premiere.

Then there’s the music box that seemed to lead Neal and Kate into that tragic first season finale. Both Withdrawal and next week’s episode, Need to Know, set up the manner in which that piece of antiquary will play into the season arc. At least one key revelation is in regard to it.

Series creator Jeff Eastin’s script is as smart and knowing as we’ve come to expect. White Collar really hit its stride over the last half of its first season and Eastin shows that he’s aware of the show’s strong points and capable of playing to them in ways that feel fresh and lively.

Withdrawal is directed by Tim Matheson, who can claim a double-header this evening [he also directed the covert Affairs pilot – a gig that lead directly to this one. Matheson understands the USA house style – he’s both guest starred in and directed episodes of four of the network’s series, as of this ep – and deftly weaves White Collar’s significant elements [banter between the characters, dramatic moments and action] together in a manner that both highlights the strengths of the writing and the cast.

White Collar gets off to a flying start with Withdrawal [and next week’s Need to Know] and serves notice that the show’s second season will live up to the promise of the first season’s final episodes.

Note: You can learn more about White Collar at the show’s website: http://www.usanetwork.com/series/whitecollar/