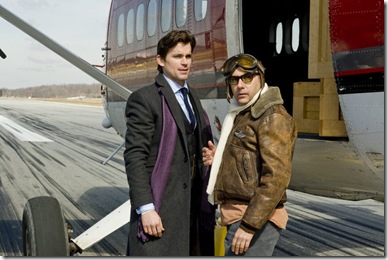 In White Collar’s second season finale, the show wrapped up two years of mythology involving the death of Neal Caffrey’s one true love, a mysterious music box, fractals and Nazi treasure. The final scene had the emotional impact of a typically perilous cliffhanger, but the impact came from the war of emotions raging within Caffrey. In tonight’s third season premiere of the USA Network hit [Tuesdays, 9/8C], we learn how that emotional battle plays out.

On Guard reveals, in its opening minutes – after Neal is polygraphed by Peter – that the treasure from the Nazi sub was taken by none other than the wily Mozzie [Willie Garson] – and that he and Neal [Matt Bomer] have decided to take their ultimate score and run. There’s just this little matter of time – it will take several days to complete preparations to move the treasure out of the country, and Peter [Tim DeKay], naturally suspects that Neal, Alex [Gloria Votsis, who doesn’t appear in the premiere] or Mozzie pulled the switch in the now destroyed warehouse that housed the treasure for Vincent Adler.

In the meantime, in order to maintain a sense of what passes for normalcy in his professional relationship with Peter, Neal has to help bring down a thief who stole 60 million dollars before feeling the country without it.

The developing plan to corral the thief – and the 60 mill – is pretty cool, but while it’s clear that Neal really loves helping Peter nab these white collar crooks, he still wants that ultimate score. For him, the surprise is at how much he wants to stay and continuing working with Peter – at least as much as he wants to help his best friend and mentor retire with that ultimate score.

The screener contained no credits, so I have no idea who actually wrote On Guard, but as well as they developed the white collar crime of the week, they made some blunders on Neal and Mozzie’s side of things [like the amount of time it takes for a painting – or piece of painting – to dry, or the time it takes to paint a convincing forgery, as just a couple of examples].

Because the real issue is the bond of trust that is supposed to have been built between Peter and Neal, and the conflict in Neal’s desire for the ultimate score versus his growing enjoyment from the work he does with Peter [not to mention a very real friendship with Peter], it’s troubling that what are rather minor technical issues get in the way.

Fortunately, On Guard is a fast-paced, mostly smart episode that places more emphasis on the cast of characters and makes the technicalities of Neal and Mozzie’s tap dancing around Peter’s suspicions less important. It’s the trust issues and the way characters deal with them that makes White Collar’s third season premiere worth watching.