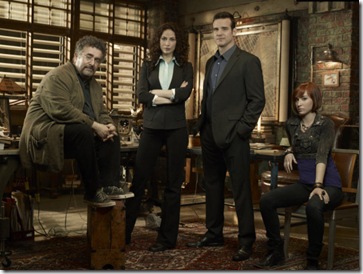 Syfy’s Warehouse 13 had a second season that both entertained like crazy and pulled in strong ratings, so it’s hard to understand why the series didn’t have a third season pick-up by the time the second season ended. Finally, the logical/inevitable decision was made and the snappy series about two Secret Service agents who snag, bag and tag dangerous supernatural artifacts has been granted  that well deserved third season.

Executive Producer Jack Kenny has signed a new development deal that will see him continue to head the show’s creative team and work on new projects for Syfy.

NEW YORK – October 5, 2010 – Buoyed by strong ratings and critical acclaim, Syfy today announced a third season pickup of 13 episodes for its hit dramedy Warehouse 13, which will return in 2011.

Universal Cable Productions also announced that Jack Kenny has signed a development deal that will return him for a third season as Executive Producer and Showrunner of Warehouse 13.

In making the announcement, Mark Stern, Executive Vice President, Programming, Syfy, and Co-Head, Original Content, Universal Cable Productions, said: “Jack Kenny’s superlative leadership and the incredible talent of his cast and crew delivered an outstanding second season of Warehouse 13. We’re excited to see this successful series return next year, and to developing our next hit with Jack.”

Warehouse 13 is produced for Syfy by Universal Cable Productions. Jack Kenny (The Book of Daniel) is Executive Producer and Showrunner.