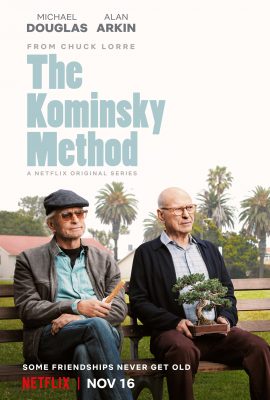 The Kominsky Method will have its world premiere at AFI Fest on Saturday, November 10th.

It will premiere globally on Netflix on Friday, November 16th.

The Kominsky Method will have its world premiere at AFI Fest on Saturday, November 10 in Los Angeles. The festival will premiere the first three episodes of the series, which is the first scripted episodic to be presented as a Gala Screening at the festival.

About The Kominsky Method

The sun isn’t setting yet on the once famous Sandy Kominsky and his longtime agent Norman Newlander. Academy Award® Winners Michael Douglas (Kominsky) and Alan Arkin (Newlander) star as two friends tackling life’s inevitable curveballs as they navigate their later years in Los Angeles, a city that values youth and beauty. Both comedic and emotional, The Kominsky Method is an 8-episode, half-hour single camera show created by 8-time Emmy Award Nominee Chuck Lorre.