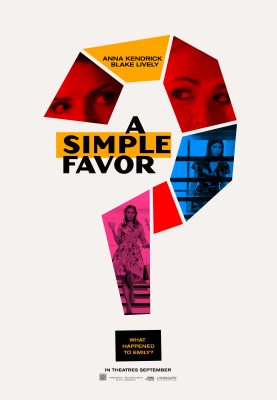 ‘Five days ago, Emily went missing. I’m realizing I don’t know her as well as I thought I did,’ Mommy vlogger Stephanie (Anna Kendrick) – who is trying to find out what happened to her best friend (Blake Lively) in A Simple Favor.

I’m not sure exactly what elements of the trailer sparked the thought, but  does it make the film seem very Hitchcockian.

A SIMPLE FAVOR, directed by Paul Feig, centres around Stephanie (Anna Kendrick), a mommy vlogger who seeks to uncover the truth behind her best friend Emily’s (Blake Lively) sudden disappearance from their small town. Stephanie is joined by Emily’s husband Sean (Henry Golding) in this stylish thriller filled with twists and betrayals, secrets and revelations, love and loyalty, murder and revenge.