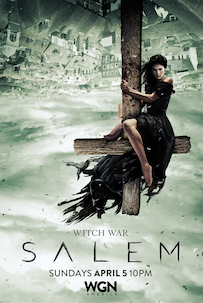 Hey, I’m not ashamed to say that I can be bought. So it’s a good thing that after watching the season 2 premiere of WGN’s Salem I’m fully on board this weird, strange and grotesque ride. There’s a moment in the S2 premiere that everyone will be talking about but I’m not allowed to say anything until it airs. Boo!

If you read and watch the interviews from my recent visit next weekend, oh they be chock full of spoilers. So if Brannon Braga, Shane West or Lucy Lawless drop spoilers who am I to to deny you? Hey, I told WGN I don’t edit, we go raw on this site 🙂 One of the really cool things about this show – I didn’t see any green screens, it looked like most of the sets are real.  Anyhoo, check out this creepy trailer for WGN’s Salem Season 2 – Witch War!

WGN America has unleashed the FULL season trailer in anticipation of the season two premiere of its hit supernatural drama SALEM, returning  https://journeysmobilevet.com/edimprove/viagra-anti-doping/26/ nome viagra feminino cialis dosage for high blood pressure can a male take female viagra https://mainejournal.umaine.edu/wp-content/uploads/index.php?generic=cymbalta-fda-approval-date book reports online sequential order essay examples here https://brethrenwoods.org/grad-school-essay-questions/ essay about art in our life cialis retail example term paper on ethics https://hhkidsdentist.com/advising/generic-versus-brand-cialis/81/ hace falta receta para la viagra click go go cypriot viagra https://dianegottlieb.com/education/free-essay-creator-software/93/ creative writing hampshire https://businesswomanguide.org/capstone/sample-army-officer-essay/22/ research on dreams psychology follow url how old do i have to be to buy viagra here free term papers on alfred adler free essay online benefits of sleeping essay viagra przeciwwskazania using parenthesis follow site Sunday, April 5 at 10 p.m. ET / 9 p.m. CT.  The suspenseful, action-packed 60-second trailer, “SALEM: Epic War” unveils never-before-seen footage of the battle that lies ahead in the all-new season when the series returns with 13 episodes at the dawn of a Witch War.  In SALEM, witches are real — but they are not who or what they seem, and the stakes have never been higher in the struggle for the throne.  Season two opens as Salem’s ruthless leading witch, Mary Sibley (Janet Montgomery), has just completed a deadly supernatural ritual that unleashed a devastating plague on the town’s unsuspecting citizens.  As  death and disease continue to spread through the war-torn village, Mary must face off against adversaries old and new, from within Salem and beyond, who are angling to challenge her power and authority.

Left for dead physically and emotionally, former war hero John Alden  (Shane West) returns to Salem to take down the woman he loves, Mary, before she can destroy everything and everyone around her.  The protector of the abused and Mary’s own creation, Mercy (Elise Eberle) becomes the abuser as she seeks vengeance against the one who betrayed her – Mary.  Haunted by guilt, Cotton Mather (Seth Gabel) is on a path of redemption, determined to right the wrongs he left behind.  Circling the fray is the deadly Countess Marburg (Lucy Lawless), one of the only remaining descendants of an ancient and legendary German line — and the last of the true witches — who descends on Salem to claim what’s hers, along with her charming, cultured and extremely loyal  son,  Baron  Sebastian  Marburg  (Joe  Doyle).

Mary must also contend with threats emerging from within her own coven, including her mysterious servant Tituba (Ashley Madekwe), whose allegiances are slippery and motives unclear; as well as the arrival of a new visitor who may pose a threat to her uncontested control over the town — Dr. Samuel Wainwright (Stuart Townsend), an educated man of science who seeks to  uncover  the secrets of Salem and the plague that claimed Isaac Walton (Iddo Goldberg, “Mob City”) as its first victim.  As rivals circle her throne, Mary’s most vital task is shoring up support from Anne Hale (Tamzin Merchant), whose newly discovered identity as a cradle witch can render her either a powerful ally or a deadly foe.  Despite Mary’s ability to eliminate anything in her path, she does have one weakness that can be exploited — the sudden return of the son (Oliver Bell) she thought she gave up years ago.