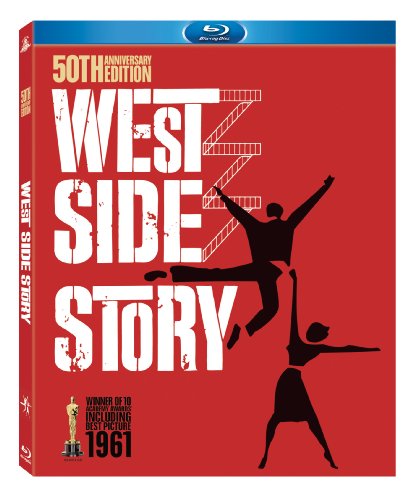 I’ll admit it, I never understood the popularity of West Side Story, I have never seen the play, but have heard the soundtrack and played (on Piano) several songs from it as part of my High School Choir, I always found the music kind of terrible. If the music in a Musical is terrible, then I hold little hope that the show is any good. So now West Side Story is out in a beautiful fully loaded 50th Anniversary Blu-ray edition.

“The winner of 10 Academy Awards, this 1961 musical by choreographer Jerome Robbins and director Robert Wise (The Sound of Music) remains irresistible. Based on a smash Broadway play updating Shakespeare’s Romeo and Juliet to the 1950s era of juvenile delinquency, the film stars Natalie Wood and Richard Beymer as the star-crossed lovers from different neighborhoods–and ethnicities. The film’s real selling points, however, are the highly charged and inventive song-and-dance numbers, the passionate ballads, the moody sets, colorful support from Rita Moreno, and the sheer accomplishment of Hollywood talent and technology producing a film so stirring.” (TPS from Amazon)

This is my first experience with the movie and let me say this transfer is gorgeous. I have seen crisp and sharp looking HD transfers before, but this is ridiculous and in a good way. Yes there’s some grain in the picture but the grain actually looks good because the sharpness washes it out and heightens the color contrasts so everything jumps out, the reds are really deep and rich. The way Director Robert Wise lit the movie also really shines – literally. The new audio transfer breathes new life into Leonard Bernstein and Stephen Sondheim score.

The menu navigation is simple and includes snippets of the soundtrack. The animated background with the simple text menu looks AMAZING! This Blu-ray set comes in the 3-Disc variety – the movie on one, a separate Blu-ray disc for extras and a 3rd disc for the DVD version – no digital copy option.

While I still didn’t like the music in this, the experience of watching this transfer is amazing and now the music has a little more context for me.

This set includes a lot of nice extras.

Let’s stand up and applaud everyone involved in this Blu-ray project, from the stunning transfer to the great set of extras, they did an excellent job with this Blu-ray set and produced reference quality work.