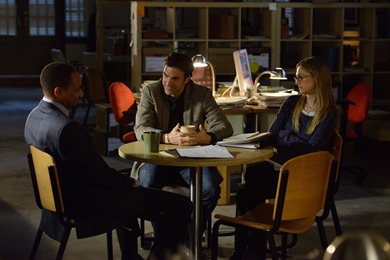 NEW YORK- May 6, 2014 –  This July, WE tv’s first original scripted drama, The Divide, will debut with a special two-hour premiere on Wednesday, July 16th, at 9:00pm ET/PT before moving to its regular 10:00pm ET/PT timeslot beginning on Wednesday, July 23rd .  The eight-episode series is written by the Academy Award® and Emmy® nominated Richard LaGravenese (Behind the Candelabra, The Fisher King, Water for Elephants, The Ref, The Bridges of Madison County), with Tony Goldwyn (Scandal, Conviction, Justified, Damages, Dexter, A Walk on the Moon) directing the premiere episode. Co-created by LaGravenese and Goldwyn, the series is produced by AMC studios.  The Divide is a thought-provoking and suspenseful drama that explores the personal cost of morality, ambition, ethics, politics, and race in today’s justice system through the eyes of Christine Rosa played by Marin Ireland (Homeland, Boss, Side Effects), an impassioned caseworker with The Innocence Initiative, and Adam Page played by Damon Gupton (The Newsroom, Prime Suspect), an equally passionate district attorney and political rising star.

Twelve years ago, the Butler family was attacked in their Philadelphia home and all but the youngest daughter were brutally murdered. The senseless deaths of this affluent African American family, seemingly at the hands of two white construction workers, Terry Kucik (Joe Anderson) and Jared Bankowski (Chris Bauer), threatened to ignite a racial firestorm in the City of Brotherly Love. Adam Page (Gupton), himself an affluent African American man and the city’s District Attorney as well as a political rising star, made a name for himself by securing convictions for both men, leading to the death penalty ruling for Bankowski.  Now, Christine Rosa (Ireland), a caseworker with the Innocence Initiative, believes Bankowski was wrongly convicted of the heinous murders and struggles to stop his impending execution, while tirelessly working to exonerate Kucik.

In her search for the truth, Christine uncovers evidence that puts her at odds with Adam who will do everything in his power to uphold the verdict and keep his reputation intact.  His actions put a strain on his marriage to Billie, played by Nia Long (The Best Man Holiday, House of Lies), a powerhouse corporate attorney at a crossroads in her personal and professional life. Faced with the question of one man’s guilt or innocence and motivated by their own personal histories, each struggle between wrong and right – their own divide – in the quest for justice.

The Divide also stars Paul Schneider (Parks and Recreation, Water for Elephants, Family Stone) as Clarke Rylance, an old law school buddy of Adam and Billie’s who chooses a different path when he signs on with The Innocence Initiative; Joe Anderson (Across the Universe and Twilight Saga Breaking Dawn Part 2) as Terry Kucik, who is sentenced to life in prison for the brutal murder of the Butler family; and Clark Peters (The Wire, Treme) as Isaiah Page,  Adam’s father and Police Commissioner of Philadelphia.

The debut of The Divide will be accompanied by a variety of exclusive material available at www.wetv.com.

Fans can watch the series trailer, in-depth character explorations, behind-the-scenes videos, first-look photos, cast bios and more. Each episode will be complemented by an Inside-The-Episode featurette with the cast and crew that breaks down the story and scenes in further detail.  Fans can also learn more about the Innocence Project organization, the inspiration behind The Innocence Initiative.  All assets will be made available on a multitude of platforms optimized for desktop and mobile.

WE tv (www.wetv.com) showcases and celebrates modern women who are bold, independent and taking control of their lives. Whether they are celebrities like Joan Rivers or Toni Braxton, or everyday women, their stories are as relatable as they are entertaining. WE tv’s popular slate of fresh and modern unscripted original series includes the hit shows Braxton Family Values, Joan & Melissa: Joan Knows Best? and Mary Mary, among others. WE tv will debut its first scripted series, The Divide, in 2014. Audiences connect to WE tv online, on demand and via social media. WE tv is owned and operated by AMC Networks Inc. and is available in over 85 million homes on every major cable, satellite and telco provider.

Photo courtesy of We tv