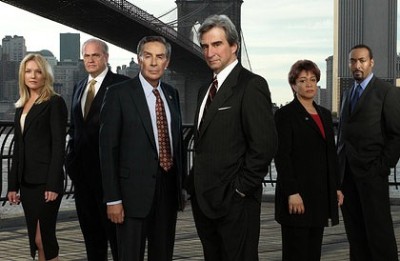 Not one to wait, We tv is beginning its celebration of Law & Order’s 25the anniversary a wee bit early – beginning with ten of  L&O’s best episodes over two nights: Tuesday, July 28th and Wednesday, July 29th (8/7C) – and including never-before-see bonus footage, behind the scenes extras and more. Then, in August, the network will run Law & Order blocks three nights a week – Tuesdays, Wednesdays and Saturdays (5-11/4-10C).

Fans can further explore WETV.com for Law & Order-themed quizzes and articles like Which Law & Order Cast Member Are You?

WE tv is getting a jump start on the milestone 25th anniversary of “Law & Order,” the popular criminal procedural that paved the way for the drama genre with a month-long celebration in August.  The festivities begin with a two-night marathon on Tuesday, July 28 and Wednesday, July 29, beginning at 8:00pm ET, featuring the best episodes from the series, including never-before-seen bonus footage, behind-the-scenes extras and more.  The party continues all month with Law & Order blocks three nights a week – Tuesdays, Wednesdays and Saturdays – from 5pm-11pm.

In addition, fans of the hit series can indulge in their guilty pleasure online at www.WETV.comfor an immersive experience with themed quizzes and articles – from the “Top 25 Law & Order Moments” to “Which Law & Order Cast Member Are You?”

8:00pm — “Helpless” — Dr. Olivet accuses her gynecologist of rape, but Stone finds his case in trouble when he discovers that Olivet tape-recorded the crime.

9:00pm — “Prince of Darkness”– Cerreta poses as a weapons dealer to help Stone build a case against a Colombian hit man, but the deal takes an unexpected turn, resulting in bloodshed.

10:00pm – “Sweeps” — Logan and Briscoe investigate after a convicted child molester, Dr. Joseph Vinton, is murdered on Rick Mason’s controversial talk show. During the course of the investigation, however, the detectives find evidence that leads them to believe the murder was set up to assure high ratings during sweeps period.

11:00pm  — “Profile” — After a number of neighborhood residents are murdered, the police follow the investigation to a local racist who is killing people he doesn’t feel belong in his neighborhood.

12:00am – “American Dream” — A dig at a building site uncovers the body of Sid Cohen, who had gone missing and been presumed murdered years earlier. The identification of the body proves troublesome for Stone, who had initially prosecuted Phillip Swann eight years earlier and had obtained a conviction.

8:00pm – “Old Friends” — A truck hits a pedestrian and the investigation reveals the victim’s link to a baby-food company in which a new partner has connections to the Russian mob.

9:00pm  — “Coma” — A comedy-club owner comes under suspicion for having shot his wife, now comatose with a bullet in her head, after it’s discovered he was abusive and she was about to divorce him.

10:00pm  — “Performance” — Briscoe and Logan set out to identify the apparent victim in a snuff film, but find her alive and really the victim of a points-for-sex club at her prestigious high school.

11:00pm – “Aftershock” — After Briscoe, Curtis, McCoy, and Kincaid witness the execution of a criminal they brought to justice, their unique reactions to the event culminate in personal tragedies for each of them.

12:00am —  “Under the Influence” — After Briscoe and Curtis finally determine who was driving the car that killed three people, the legal prosecution stands in danger of becoming a kangaroo court when McCoy’s feelings over Kincaid mesh with the political agenda of an ambitious judge anxious to make an example of the defendant.

Law & Order, which first premiered on NBC on September 13, 1990, is a police and court drama created by Dick Wolf.  The series ran for 20 seasons on NBC, from 1990 to 2010, with 456 episodes, spawning four American spinoffs and a movie. The structure for the one-hour show is a two-part approach: The first half focuses on NYPD homicide detectives investigating a crime – often derived from a real-life headline – and apprehending a suspect. The second half takes place in the courtroom, with the district attorney prosecuting the defendant. “Law & Order” is known for its revolving cast. The series managed to keep a unifying identity even as its familiar faces were replaced with new ones over the years. Lt. Anita Van Buren (S. Epatha Merkerson, “The Closer,” “Deception”) had the longest run, at 17 seasons. Jack McCoy (Sam Waterson, “The Newsroom,” “Grace and Frankie”) was right behind her at 16. D.A. Adam Schiff (Steven Hill, “Mission: Impossible,” “The Firm”) was a main character for the first 10 seasons, making him the longest-running character from the original cast. Detective Lennie Briscoe (Jerry Orbach, “House of Mouse,” “Law & Order: Trial by Jury”) had a 12-season arc, and Detective Ed Green (Jesse L. Martin, “Smash,” “The Flash”) was on the show for nine seasons.

With compelling, can’t miss unscripted shows and dramatic scripted series, WE tv’s programming is fueled by personalities and relationships filled with purpose and passion. WE tv welcomes everyone and creates an inclusive experience across all platforms: on TV, online, on demand, and social media, embracing how today’s digitally savvy, socially engaged audiences connect through content, using it as a catalyst to drive conversation and build community.  WE tv is owned and operated by AMC Networks Inc., and its sister channels include AMC, BBC America, IFC and SundanceTV.  WE tv is available to over 85 million U.S. homes.  WE tv: All In.