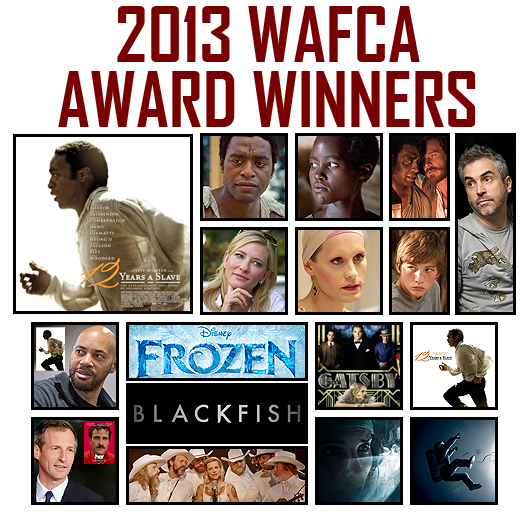 Hey Everyone, I’ve been sucked into the black-hole known as end of the year movie award madness – nearly 60 movies in four weeks. The Washington, DC Film Critics Association (WAFCA) announced this year’s crop of winners. For a change I can’t complain about our selections, every category featured at least one of my nominations and most of the eventual winners were some of my nomination picks (even if I may not have voted for them in the final balloting).

Twelve Years A Slave is one of the toughest, most uncomfortable, but important films to come out in years and deserves to be recognized as one of the year’s best. Other highlights for me include Jared Leto (Dallas Buyers Club) getting Best Supporting Actor (although I ultimately voted for James Franco) and seeing The Great Gatsby snagging Best Art Direction. My only minor gripe is Emma Watson’s performance in The Bling Ring didn’t make it onto the ballot.

“This story of perseverance and the triumph of the human spirit over degradation and misery appealed to our members in a powerful way,” said WAFCA President, Tim Gordon, “and I’m proud of the choice that we collectively made.”

The Washington, D.C. Area Film Critics Association is comprised of 58 DC-VA-MD-based film critics from television, radio, print and the Internet. Voting was conducted from December 6-8, 2013.