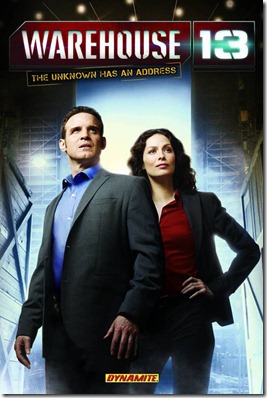 If Cornell Wilde had adapted Warehouse 13 for comics, he might have come up with the storyline that comprises Warehouse 13, Volume One.

The five issues of Dynamite Entertainment’s Warehouse 13 comic comprise a tale of lost artifacts, multiple homicides and a nasty variation on Cornell Wilde’s The Naked Prey.

Each of the first three chapters deal with Warehouse agents Pete Latimer, Myka Bering and Claudia Donovan chasing down artifacts of incredible power – artifacts that have an unexpected connection to Warehouse 12 and a lost ship.

One of the artifacts causes a side effect of massive sinkholes and its latest use causes one that destroys a quarter of a Brazilian favela – and hundreds of lives! Another creates a thick, black fog that causes people to vanish – especially tourists to the small Irish town of Inis Orr. The third cuts through any material, no matter how strong – and seems to be leading to a takeover of the five major Yakusa clans of Japan.

Unfortunately, these artifacts are not the random assortment of weirdness with which Bering and Latimer usually contend. Instead, they are clues – clues that lead to a hunt. A hunt in which they are the prey.

Although produced by a substantial number of writers and artists, the singular tale that encompasses all five issues is a remarkably uniform one in terms of character and plotting. The comic does a terrific job of capturing the elements that make Warehouse 13 a successful TV series: Myka’s intellectual gifts (and her looking hot in a Brazilian carnival costume), Pete’s sense of humor and intuition; Claudia’s facility as both a computer whiz and creator of cool gadgets (as witness, her Satchel of Shenanigans) and Artie’s weirdly avuncular style as head of the Warehouse. Also, the new artifacts that appear here are as devious, twisted and imaginative as any that have appeared on the show.

Artists Ben Morse (issues 1-3), Robert Gill (issue 4) and Gordon Purcell (issue 5) are clearly working to a specific overall Warehouse 13 style, but each has stylistic differences. Morse’s work is harder edged and a bit more angular in line but with stronger, more fluid inks – it’s bolder, overall (think Carmine Infantino solo and Infantino inked by John Broome); Gill’s work is more finely lined (think Vince Colletta), and Purcell fits somewhere in between, but with a slightly more fluid overall line. The layouts throughout are pretty standard, but that works because the action within those layouts is not.

As a whole, Warehouse 13, Volume One is a fun ride (like the TV series), but never quite builds on its source. The result is entertainment enough, though, to be recommended to fans.