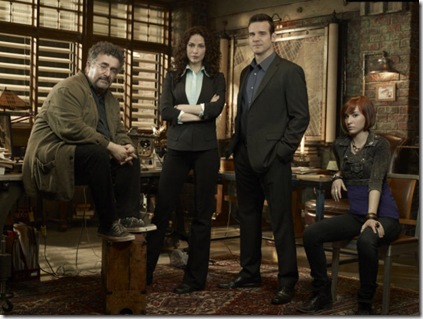 Warehouse 13 [Syfy, Tuesdays, 9/8C] returns tomorrow evening with the first two extremely different episodes – even for what is already one of the strangest [in the most delightful way possible] shows on television.

When we left the intrepid team of Warehouse 13, the rogue former Secret Service agent MacPherson [Roger Rees] had just blown up the umbilical tunnel that connected the warehouse to the outside world – and, apparently, Artie [Saul Rubinek] with it!

Proving that something of Artie and MacPherson’s partnership from the past still survives, Artie finds himself reassembling before the stunned, worried eyes of Pete [Eddie McClintock] and Myka [Joanne Kelly]. With the phrase, “So that’s how that works,” Artie reveals that he’s been saved by way of the Phoenix artefact, which has somehow found its way into his pocket.

Meanwhile, Claudia [Alison Scagliotti] has fled to Cern, Switzerland, where she hopes her brother, Joshua [Tyler Hynes], will be able to help her find out if she’s really the one who sabotaged the warehouse – and Mrs. Frerderic [CCH Pounder] has figured out Leena’s [Genelle Williams] secret [the one mentioned in the above headline – not the one that crops up this season…].

Unfortunately, things are about to get much worse, as Pete and Myka discover that the second person to be de-bronzed is none other that H.G. Wells [Jaime Murray] – and the estimable author has been thinking, and nursing a grudge, for almost a century! 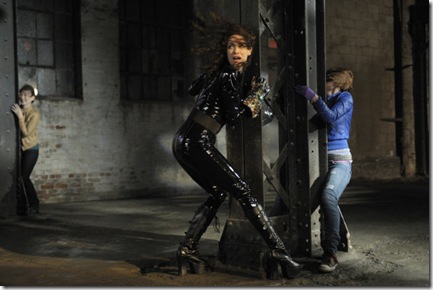 Fast-paced and filled with lots of cool “warehouse moments” [I expect the Escher Vault to be very interesting in its final form]and intriguing character developments, the second season premiere of Warehouse, Time Will Tell, makes good use of the diabolically charming [or is that, charmingly diabolical] James MacPherson, adds a potentially very scary recurring villain and brings a moment of genuine tragedy into Artie’s life.

No one emerges completely unscathed from this episode – except, maybe, Myka. Certainly, there is a rift between Claudia and Leena [see: identity theft of the century], and Artie suffers once more because of his commitment to the warehouse. Even Pete gets salt in a particular wound – at the hands of Myka, no less [though that might be mitigated, somewhat by the end of next week’s ep]. Character is one of the series’ best aspects, and Time Will Tell is a good example of how that works.

What is especially intriguing, though, is the way that certain character moments of the second season premiere play over into the season’s second episode, Mild Mannered. And by way of teaser, let me just throw this out there – Joanne Kelly [pictured above] as Wonder Woman? Works for me!