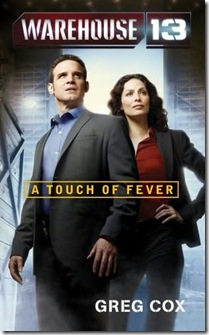 When a TV series has a dedicated following – especially a genre show – then there’s a good chance it will spawn tie-in novels. Recent examples include USA’s burn Notice and Syfy’s Eureka. Now comes the first Warehouse 13 novel, A Touch of Fever by Greg Cox – and it is a perfect example of how to do a TV tie-in novel.

A Touch of Fever opens with Secret Service agents Pete Lattimer and Myka Bering wrapping up a case by taking on a museum worker possessed by the cutlass of legendary pirate Anne Bonny. Upon returning to their base, the titular Warehouse 13, their boss, Artie Nielsen has a pip for them – a young woman is mysteriously healing the sick. She’s not a charlatan – her cures last!

While Artie’s apprentice, spontaneous teen Claudia Donovan and aura-reading Leena work on inventory, Pete and Myka are off. But what they don’t know is that there is someone out there who is making people sick, too.

A moment for explanations: the first Warehouse was established by Alexander the Great [at Alexandria, natch], to hold items whose properties were such that they were beyond the control of people and could [to paraphrase Artie] ‘try to ruin the world’s day.’ There have been thirteen such Warehouses through the ages – each building the collection of artifacts left by its predecessor, and each housed in the most influential empire of its day. Thus Warehouse 13, hidden away in the South Dakota Badlands – and the unincorporated village that has built up [unknowingly] in part to provide for the Secret Service agents who are assigned to it. Think: the warehouse at the end of Raiders of the Lost Ark, times a million.

Now, you’d think that pursuing the mysterious healer [and dealing with the fellow who’s busily doing the opposite] would be the main arc of the novel, but as with the series, there are other things going on. To wit: an artifact not properly set on its shelf that begins a supernatural, Rube Goldberg series of events that cause a problem for Claudia and Artie. Hint: it involves a tin pot belonging to John [Johnny Appleseed] Chapman – and it’s so not what you’d probably be guessing.

And now for a brief word about Greg Cox.

With A Touch of Fever, Cox brings his invisible style [which is to say that he adapts to each new piece in ways that make it feel part and parcel with the originating work] to Warehouse 13.

Fans of the show will find the banter and pacing familiar, while newcomers to the Warehouse will be able to jump right in without having seen the show – everything you need to know is included, seamlessly, in the development of the novel. References to past cases will delight fans of the show, while giving newcomers a sense of a world that has a real past and, therefore, a potential future.

Cox makes the stakes, perhaps, a bit more real than the series – he has more space to develop situations and build on the characters. He also manages the show’s unique blend of science fiction, horror and fantasy, humor and drama very well.

The book’s only flaw is the very generic cover, on which Pete and Myka are clearly looking in very different directions…

If you’re a fan of the series, you should love Warehouse 13: A Touch of Fever. If you’ve never seen the show, this is a good place to jump onboard. Just be careful – this world is so engaging that you might find yourself rushing out to get the show’s first two seasons on DVD/Blu-ray. [Just sayin’…]