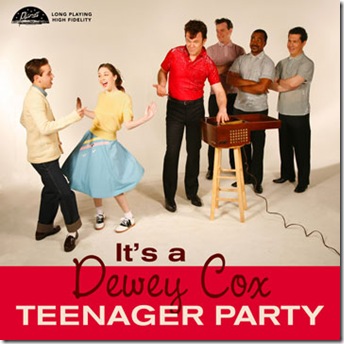 For many people the quintessential rock and roll spoof is the classic mockumentary This is Spinal Tap. Walk Hard is a spoof of the Rock and Roll bio picture and the music industry, but it’s not trying to be Spinal Tap, and it’s not trying to be a spoof of E!’s True Hollywood Story.  Well, then again maybe it is.   Honestly, I’m not quite sure what it’s trying to be. The humor is not sophisticated, or dry, or even over the top. It goes for the sweet middle ground, and you know what?  That’s ok, because, for the most part this movie works.  The first 1/2 hour has some laugh out loud moments, 30 minutes into it, it clearly runs out of steam, but picks up again for the third act.

John C. Reilly‘s Dewy Cox is part Elvis crossed with Johnny Cash, his music makes girls go wild.  He eventually falls in love with his own June Cash, his backup singer Darlene Madison (played by Jenna Fischer) He’s chasing the dream of one day writing the perfect song that sums up his entire life.  Along the way he has a series of tragedies including the death of his brother and mother which sends him spiraling out of control and into a world of drugs given to him by his constantly high band mate Sam (Tim Meadows). That’s about all the plot you need to know. 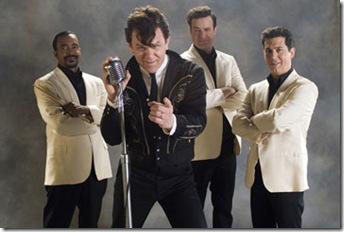 Director Jake Kasdan and his writing partner Judd Apatow craft a story filled with one note jokes that felt like they were written in a comedy shop.  But for some strange reason, they are so earnest in this film that these otherwise lame jokes work here.  The problem is, there’s a fine line between doing a "call back," and simply repeating the same gag over and over again.  Most comedies will have one or two running gags throughout. Walk Hard has about 7 or 8 and it eventually gets a little irritating seeing the same exact gag 8 times.  When his stern father says "The Wrong Kid Died,"  it’s funny the first 5 times he says it, but by the 10th the joke gets old.

The film is so winky, wink and self aware that while it makes you laugh in the first 15 – 20 minutes it starts to wear thin quickly.  For example in the beginning Dewy’s brother spends 5 minutes talking about how it’s great to be young and have your whole life in front of you, where tragedy would never strike a 10 year old kid, and when I grow up I’m going to be President, Walk On the Moon and more. Then we see them playing in the fields with rattlesnakes, blow torches, and playing chicken.  You just know how it’s all going to end and it’s so cheap, but it works.    There’s an hysterical bit that comes, "out of the blue" where Dewey meets the Beatles.  It’s so bad that it’s funny.  And I can’t tell you if that’s good or bad.

I love John C. Reilly and think he’s great in just about anything, here he is good, but he does start to grate a little.  Especially when it’s clear the material isn’t funny and it smacks of him trying too hard to make it work.  It’s hard to believe that this is from the same director that did the excellent The TV Set and the awful Orange County.  Kasdan is really coming into his own as a director and it’ll be interesting to see what he does next. Walk Hard: The Dewey Cox story isn’t pee in your pants funny, but it does have it’s moments and for the most part it works.