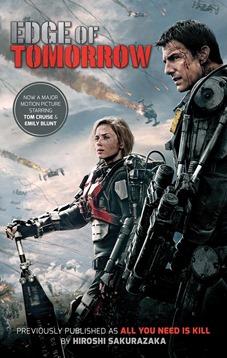 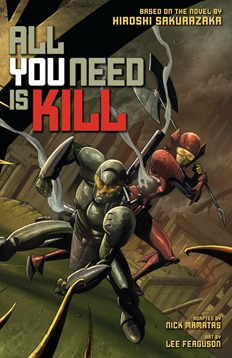 San Francisco, CA, April 14, 2014 – VIZ Media’s Haikasoru literary imprint supports the upcoming release of the gripping sci-fi action film, Edge of Tomorrow with the release of an official movie tie-in novel on April 29th. The new EDGE OF TOMORROW paperback release will carry an MSRP of $7.99 U.S. / $9.99 CAN. The book features a cover with the official movie poster featuring Tom Cruise and Emily Blunt in their title roles from the film. The EDGE OF TOMORROW novel was written by Japanese author Hiroshi Sakurazaka, and was previously published as ALL YOU NEED IS KILL.

The Haikasoru imprint has also announced the May 6th release of the ALL YOU NEED IS KILL official graphic novel adaptation. Written by Haikasoru editor and noted sci-fi author, Nick Mamatas, and featuring full-color artwork by popular comic book artist Lee Ferguson (Green Arrow, Miranda Mercury), the new graphic novel offers a single-volume retelling of the original ALL YOU NEED IS KILL novel that inspired the EDGE OF TOMORROW movie. The graphic novel carries an MSRP of $14.99 U.S. / $17.99 CAN, and features an oversized North American graphic novel trim size of 6 5/8" x 10 ¼”. An eBook edition will also be available worldwide for $8.99 (U.S. / CAN) for the Amazon Kindle, Apple’s iBooks Store, Barnes & Noble’s Nook Book Store, and the Kobo eBooks Store. North American fans can also access the graphic novel digitally on the VIZ Manga App as well as through VIZManga.com.

The Edge of Tomorrow feature film is slated for U.S. release from Warner Bros. Pictures on June 6th, and will be presented in 3D and 2D in select theaters, and 3D IMAX. The movie is directed by Doug Liman and stars Tom Cruise, Emily Blunt and Bill Paxton.

The story is set in the future when aliens called Mimics invade. Keiji Kiriya is just one of many recruits shoved into a suit of battle armor called a Jacket and sent out to kill. But he dies on the battlefield after only a few minutes, only to be reborn each morning to fight and die again and again. On his 158th iteration, he gets a message from a mysterious ally – the female soldier known as the Full Metal Bitch. Is she the key to Keiji’s escape or his final death?

In 2009, ALL YOU NEED IS KILL served as the launch title for Haikasoru, a unique imprint developed by VIZ Media dedicated to publishing the most compelling contemporary Japanese science fiction and fantasy for English-speaking audiences. New York Times best-selling author John Scalzi declared ALL YOU NEED IS KILL to be a novel that, "reads fast, kicks ass, and keeps on coming," and it has proven to be one of Haikasoru’s most popular titles. Sakurazaka’s other novels include Characters (co-written with Hiroki Azuma) and SLUM ONLINE, which was published in English by Haikasoru in 2010.

“Live…die…repeat. ALL YOU NEED IS KILL / EDGE OF TOMORROW delivers a nightmarish, action-packed spin on reliving one’s own triumphs, and failures,” says Nick Mamatas, Editor, Haikasoru. “Catch the original story that inspired the gripping movie with the official movie tie-in edition and in the Western comic book mode with the ALL YOU NEED IS KILL official graphic novel. Both of these debuts are perfect reads leading up to the highly anticipated theatrical debut of Edge of Tomorrow this summer!”

"The ALL YOU NEED TO KILL graphic novel stays very true to the original source novel," says Joel Enos, editor for the new comic. "We made a conscious effort to create something unique that could stand on it’s own away from both the original novel, the film and the upcoming manga, but would nicely complement and pay respects to all three! Lee’s retro-futuristic art style especially puts ALL YOU NEED TO KILL as a comic into it’s own orbit!"

Author Hiroshi Sakurazaka was born in Tokyo in 1970 and published his first novel, Modern Magic Made Simple, in 2003 with Super Dash Bunko, a popular young adult light novel imprint. There are now seven volumes in the series, and it was adapted as a manga in 2008 and became a television anime series in 2009. His 2004 short story, "Saitama Chainsaw Massacre," also won the 16th SF Magazine Reader’s Award. Sakurazaka published All You Need Is Kill with Super Dash Bunko in 2004 and earned his first Seiun Award nomination for best of the year honors in Japanese science fiction. In 2010, Sakurazaka started an experimental digital magazine AiR with fellow author Junji Hotta. He remains one of Japan’s most energetic writers of both light novels and adult science fiction.

Haikasoru’s Nick Mamatas is the author of several novels, including The Damned Highway (with Brian Keene) and Love is the Law. His short fiction has appeared in Asimov’s Science Fiction, Tor.com, Weird Tales, and numerous other venues. He’s also written comics for Media Blasters and the Squid Works! Collective and has been nominated for the Hugo, World Fantasy, Bram Stoker, and Shirley Jackson awards.

Artist Lee Ferguson has worked in comics since 2001, when he broke in at Marvel on the 9/11 Heroes tribute book, followed by work on the company’s X-Men titles. Since then, he’s worked at DC, IDW, and Dynamite, while also putting out Freak, his creator-owned project from Image Comics. His newest book is The Many Adventures of Miranda Mercury, co-created with Brandon Thomas and published through Archaia Comics. In 2012, Miranda Mercury was on YALSA’s Best Graphic Novels for Teens list and was also nominated for four Glyph Awards, including Best Artist.

For more information on EDGE OF TOMORROW / ALL YOU NEED IS KILL and the Haikasoru imprint, please visit www.haikasoru.com.

For more information on other titles available from VIZ Media, please visit www.VIZ.com.