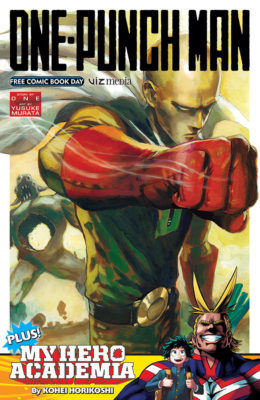 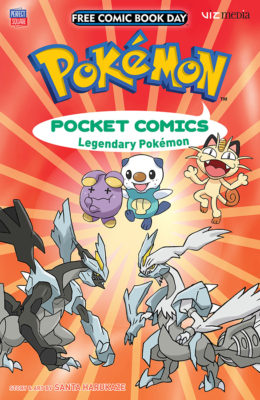 Scheduled for Saturday, May 7th at thousands of locations nationwide, Free Comic Book Day is an annual promotional campaign developed by the North American comic book industry to help bring new readers of all ages and interests into independent comic book stores. Free Comic Book Day began in 2002 and is coordinated by the industry’s single largest distributor, Diamond Comic Distributors. Readers should visit freecomicbookday.com to find local participating retailers in their area.

A sample of the newest addition to VIZ Media’s expansive POKÉMON library, presenting fun quizzes and Pokémon statistics accompanied by four-panel gag comic strips. To the forest! To the sea! To Legendary Island! Join our Pokémon pals on a quest through the Unova region for the Legendary Joke—while testing your Pokémon knowledge and laughing all the way! MSRP: $9.99 US / $12.99 CAN

Action fans can sample an excerpt from the smash hit series about an unlikely superhero in ONE-PUNCH MAN. Nothing about Saitama passes the eyeball test when it comes to superheroes, from his lifeless expression to his bald head to his unimpressive physique. However, this average-looking guy has a not-so-average problem—he just can’t seem to find an opponent strong enough to take on! Volume 6 of the series will be released on May 3rd! MSRP: $9.99 US / $12.99 CAN

In MY HERO ACADEMIA, imagine what the world would be like if 80 percent of the population manifested superpowers called “Quirks”? Heroes and villains would be battling it out everywhere! Being a hero would mean learning to use your power, but where would you go to study? The Hero Academy, of course! But what would you do if you were one of the 20 percent who were born Quirkless? Catch the debut of Volume 4 on May 3rd! MSRP: $9.99 US / $12.99 CAN

For more information on these and other manga titles published by VIZ Media, please visit: www.viz.com.