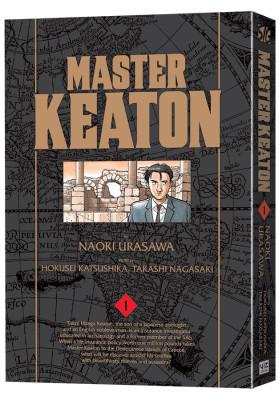 All You Need Is Kill, Hello Kitty, Master Keaton and One-Punch Man have earned Eisner Award nominations for VIZ Media.

All You Need Is Kill, Master Keaton Vol. 1 and One-Punch Man earned the publisher nominations for Best U.S. Edition of International Material – Asia, while Hello Kitty, Hello 40: A Celebration In Forty Stories was nominated in the Best Publication for Early Readers category.

The Eisner Awards, named for pioneering comics writer/artist Will Eisner, are the comic books/graphic novels equivalent of the Oscars® and are awarded at the annual San Diego Comic-Con International. For further details, follow the jump.

HELLO KITTY, HELLO 40 As Well As ALL YOU NEED IS KILL Manga, MASTER KEATON And ONE-PUNCH MAN Each Receive Nominations For Comics Industry’s Most Prestigious Annual Award

San Francisco, CA, April 23, 2015 – VIZ Media, LLC (VIZ Media), the largest publisher, distributor and licensor of manga and anime in North America, has announced that four of its critically-acclaimed titles have been nominated for the 2015 Will Eisner Comics Industry Awards, as announced by the awards committee.

The nominations include HELLO KITTY, HELLO 40: A CELEBRATION IN 40 STORIES for Best Publication for Early Readers, as well three nominations for manga (graphic novel) in the category of Best U.S. Edition of International Material – Asia. These include ALL YOU NEED IS KILL, with original story by Hiroshi Sakurazaka and art by Takeshi Obata, MASTER KEATON, Vol. 1 by Naoki Urasawa, with story by Hokusei Katsushika and Takashi Nagasaki, and ONE-PUNCH MAN, with story by ONE and artwork by Yusuke Murata.

Named for pioneering writer and comic artist Will Eisner, the awards recognize exemplary comics, graphic novels and other pop writings, and are given each year as part of the annual Comic-Con International convention, at which VIZ Media will be a major exhibitor and participant in the programs offered. The 2015 Comic-Con takes place July 9th-12th in San Diego, CA. Winners will be announced at a gala ceremony on the evening of Friday, July 10th during Comic-Con.

“We’re extremely honored to have four exemplary titles nominated for one of the most prestigious awards in the comics publishing industry,” says Hope Donovan, Managing Editor. “From the whimsical and colorful fun of HELLO KITTY to the sci-fi action of ALL YOU NEED IS KILL, the tense political intrigue of MASTER KEATON, and the knockout adventure of ONE-PUNCH MAN, these works each demonstrate the impressive creativity and dedication to outstanding storytelling and artwork that makes the mange genre so compelling. We look forward to a wide array of readers also discovering these noteworthy releases.”

This hardcover full-color anthology features a notable line-up of some of Hello Kitty’s biggest fans paying tribute in the best way they know how: through their stories and art. Contributors include the award-winning creators of the Tiny Titans series, Art Baltazar and Franco Aureliani; Brian Smith, co-creator of the New York Times bestselling series Stuff of Legend; Gene Luen Yang, award-winning author of American Born Chinese and Boxers and Saints, and Uglydoll co-creator David Horvath. Everyone has a tale to tell about the cute little kitty who speaks from her heart. Matt and Jennifer L. Holm, award-winning creators of the Babymouse series also authored the introduction.

Takeshi Obata’s ALL YOU NEED IS KILL originally premiered in VIZ Media’s WEEKLY SHONEN JUMP digital manga magazine earlier this year and is the stunning manga realization of the popular Japanese sci-fi novel, written by Hiroshi Sakurazaka (and also published by VIZ Media’s Haikasoru imprint). In this rousing action story, when the alien Mimics invade, Keiji Kiriya is just one of many recruits shoved into a suit of battle armor called a Jacket and sent out to kill. Keiji dies on the battlefield, only to be reborn each morning to fight and die again and again. On his 158th iteration, he gets a message from a mysterious ally – the female soldier known as the Full Metal Bitch. Is she the key to Keiji’s escape or his final death?

From the award-winning manga master creator Naoki Urasawa, MASTER KEATON introduces Taichi Hiraga Keaton, an archeology professor and part-time insurance investigator known for his successful and unorthodox methods of investigation. The son of a Japanese zoologist and an English noblewoman, educated in archaeology at Oxford and a former member of the SAS, Master Keaton uses his knowledge and combat training to uncover buried secrets, thwart would-be villains, and pursue the truth. The manga series was originally published in Japan between 1988 and 1994 in Big Comic Original magazine and also inspired a popular 39-episode anime adaptation.

Naoki Urasawa‘s career as a manga artist spans more than twenty years and has firmly established him as one of the true manga masters of Japan. The acclaimed creator won the 2011 Eisner Award for Best U.S. Edition of International Material – Asia for his series, 20th CENTURY BOYS (also published by VIZ Media). Well-versed in a variety of genres, Urasawa’s oeuvre encompasses a multitude of different subjects, such as a romantic comedy (Yawara! A Fashionable Judo Girl), a suspenseful human drama about a former mercenary (Pineapple Farm; story by Kazuya Kudo), a captivating psychological suspense story (Naoki Urasawa’s Monster), a sci-fi adventure manga (NAOKI URASAWA’S 20th CENTURY BOYS), and a modern reinterpretation of the work of the God of Manga, Osamu Tezuka in Pluto: UrAsawa × Tezuka.

Nothing about Saitama passes the eyeball test when it comes to superheroes, from his lifeless expression to his bald head to his unimpressive physique. However, this average-looking guy has a not-so-average problem—he just can’t seem to find an opponent strong enough to take on! Every time a promising villain appears, he beats the snot out of ’em with one punch! Can Saitama finally find an opponent who can go toe-to-toe with him and give his life some meaning? Or is he doomed to a life of super-powered boredom?

Manga creator ONE originally wrote ONE-PUNCH MAN as a web-comic, which quickly went viral, garnering over 10 million hits. In addition to ONE-PUNCH MAN, ONE writes and draws the series Mob Psycho 100 and Makai no Ossan. A highly decorated and skilled artist best known for his work on EYESHIELD 21 (also published by VIZ Media), artist Yusuke Murata won the 122nd Hop Step Award (1995) for his title, Partner, and placed second in the 51st Akatsuka Award (1998) for Samui Hanashi.

For more information on these or other manga titles published by VIZ Media, please visit www.VIZ.com.