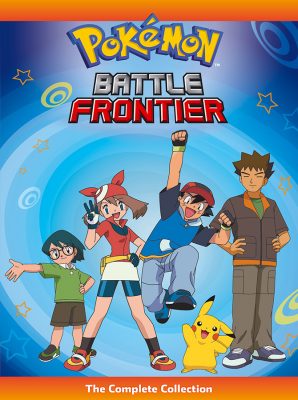 Available exclusively on DVD, Pokémon: Battle Frontier Complete Collection will be in stores on January 8th. Episodes will be both dubbed and subtitled.

Under license from The Pokémon Company International, the ninth season of the beloved adventure series features 47 episodes and will be released exclusively on DVD with an MSRP of $54.97 U.S. / $63.99 CAN. Episodes contained in the six-disc collection are presented with English-dubbed as well as English SDH-subtitled dialogue options.

In the complete collection of POKÉMON: BATTLE FRONTIER, the territory might be familiar, but even Ash and Brock can find more than a few surprises in their home region of Kanto, like a Pokémon Ranger hot on the cases of two Legendary Pokémon! May’s back on the Contest path, blazing a trail to the Kanto Grand Festival, while Ash seeks out the hidden facilities of the Battle Frontier. If finding them wasn’t hard enough, he’s still got battles with the Frontier Brains to deal with—much tougher than any Gym Leader he’s ever faced.