Did you know that 9.09.09 is going to be a huge day for the Beatles? For the first time ever The Beatles are issuing their remastered Catalog in both Mono (for you purist) and Stereo on CD. It’s widely expected that The Beatles music on iTunes will finally be announced at today’s Apple’s music event and there’s a little game called The Beatles: Rock Band. A few weeks ago I did an interview with the game’s producer Josh Randall – who must have one of the coolest jobs in the world. 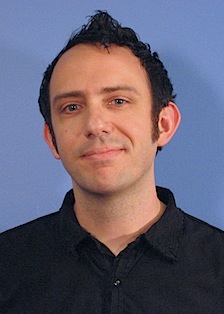 1) Can you talk a bit about how this entire project came to be? Did you pursue the Beatles or did they come to you?

The concept actually came about because of a chance meeting during the family vacations of Van Toffler, President of MTV Networks Music Group and the Harrison family, Olivia and Dhani. Dhani Harrison is a fan of Harmonix and its history and reputation for developing music games. From that conversation, MTV Games and Harmonix worked with Apple Corps to make the dream a reality.

2) Why do you think the Beatles chose you guys over your competition?

I think from our first meetings with Apple Corps, it just made sense. We were able to engage those guys on a creative level that I think made them comfortable. As our organizations got to know each other better, we grew a mutual respect for one another, and things fell into place.

The biggest new feature is probably the inclusion of vocal harmonies.  When we first started really analyzing the music of the Beatles, we realized that a key component to their sound was their rich vocal harmonies.  So, we came up with a way to turn three-part harmony into a game element.  In The Beatles: Rock Band, you can now have up to six people playing together, singing in harmony…it’s great fun! We knew this game was going to appeal to a wide range of players, including many folks who have never played a video game before.  Because of that, we made it more accessible in a few key ways.  If you are set to Easy, you can no longer fail out of a song.  If you want to play on a harder difficulty, but don’t want to embarrass yourself by failing out, our No Fail option is now easier to enable.

The new Story Mode campaign is a linear journey through the band’s career, from their beginnings at the Cavern Club, to their final live performance on the rooftop.  As you play through their story, you unlock previously unreleased photos and other media along the way. Of course, visually, it’s all been redone from the ground up to represent the band.  During the Abbey Road chapters of the game, we depart from our formula of representing the band on stage, and instead make them travel to imagined “dreamscapes.”  These are fantasy locations inspired by the song you are performing.  It was quite a challenging task to create these, but it allowed our artists to really stretch their creativity in a whole new way here, which was super exciting for the team.

4) There have been a lot of rumors regarding full albums available for DLC can you confirm this? Will the DLC only be Beatles related?

We will be releasing only Beatles’ songs for DLC for The Beatles: Rock Band. Abbey Road will be available in the The Beatles: Rock Band Music Store Oct. 20, 2009, followed by the release of Sgt. Pepper’s Lonely Hearts Club Band in November and Rubber Soul in December. We are also thrilled to announce that a special version of “All You Need Is Love” will be available for download exclusively through Xbox LIVE at launch. All proceeds from this song will be donated Doctors without Borders.

5) Can you address the issue of compatibility? Will GH Instruments work with this? How about RB 1 & 2 DLC, will I be able to import all my RB tracks into this game like before?

The game will be compatible with all Rock Band instrument controllers, as well as most Guitar Hero® and other authorized third-party music video game peripherals and microphones. The game is standalone and will not have disc export. At this time The Beatles: Rock Band will not be exportable into Rock Band 2.  We went to great lengths to craft a fully-realized interactive experience with The Beatles, so playing those songs outside of The Beatles: Rock Band doesn’t make much sense.  I mean, to get the ultimate experience out of playing these songs, you really want to see The Beatles on screen with you.

Harmonix and MTV Games were the first in the industry to implement disc export for a music game when we released Rock Band 2 last year and allowed fans to export the tracklist from their original Rock Band disc. We’ve continued that pattern with other discs within the core Rock Band franchise, including our Track Pack series. We will continue to release downloadable content for the core Rock Band catalog which now is over 825 tracks.

7) Why did you decide to do this as a full game as opposed to DLC? Will any of these tracks become available as DLC in the future?

The Beatles are the biggest band in the world, so to us it was obvious they deserved their own game.  Plus, their music and career is so rich with imagery and lore, it was just begging to be turned into game!  I think just offering DLC wouldn’t do the band or their story justice.

8) Can you talk a bit about what do you think distinguishes the Rock Band brand from your competition?

Well, I’m not really familiar with the competition, but I guess I’d have to say downloadable content is one of the biggest differentiators. Rock Band has than 825 songs on disc and DLC and recently surpassed more than 50 million paid downloads.

9) Looking into the future will there ever be a Keyboard addition to RB? And of course, I need to push my own favorite – how about Rock Band Prince (Come-on make it happen)?

Actually, we’re making a sitar version of Beatles: Rock Band next.  Kidding!  We’ve got a ton of ideas we’re playing with.  As far as future artist-specific game, we’re always up for working with creative artists that like what we do. We’ll see what happens!

10) Back to an earlier question before we go, how do these deals come together? Do you have a list of artists, songs, albums, that you’d like to get and send your people after them, or is it a case that you have now proven yourselves to the industry that now Artist see the value of it and come seeking you out?

For Rock Band, yes, it works both ways.  The team works on assembling a list of awesome tracks, then we reach out to those artists.  Lately, we’ve seen an increasing number of artists come to us, citing that they really love Rock Band and want to become a part of it.  We recently announced the Rock Band Network, which will allow anyone to get their music into Rock Band…it’s pretty revolutionary, and I’m super excited for it.

11) What do you think motivates the artist in becoming part of this project? How much and what type of input do they provide?

I wouldn’t want to speak on behalf of The Beatles. I can say though, we’ve been overwhelmed by the access Harmonix has been given to resource material throughout the development of this title, and we are unendingly grateful for the support,  enthusiasm, input and vision that Sir Paul McCartney and Ringo Starr, as well as Yoko Ono, Olivia Harrison and the entire Apple Corps team have shown.

We’re excited for the launch on Sept. 9. After that, we’re taking a vacation!

(We also have Lego Rock Band coming out this winter. Past that, we’ve got a few ideas… We’ll see what happens!)