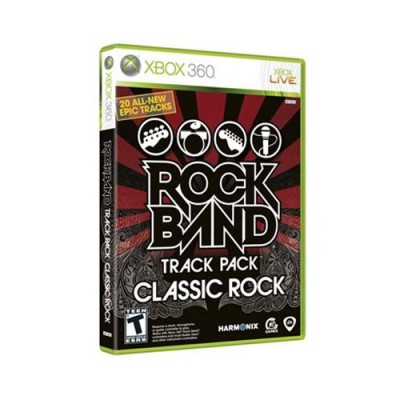 I think I’m about through with the music genre. I still love me some Guitar Hero and Rock Band, but I think after Guitar Hero Smash Hits comes out in a few weeks I’ll about at my limit – there’s just to many titles and tracks to keep up with. But before I do, I took Rock Band Track Pack: Classic Rock for a spin and it’s good. I’ve always said that Guitar Hero is the better game, while Rock Band has always been the better music “simulator.” This time out the “game” elements has been streamlined and improved upon.  This slimmed down version isn’t clutter like the main game and several things that I didn’t like about Rock Band like the way it handled Achievement Points, Scoring, and other simple game elements like progression are much better. I have over 300 Rock Band Tracks and to this day I have yet to finish Rock Band 2 because of the ridiculous way it pulls songs from all the tracks to make up each tour destination. This Track Pack set strips out all of that and takes it back to the basics. You now get achievement points for actually doing well in the game.

In the Solo Tour you play a set and it unlocks the next, making it very easy to go through the pack’s 20 songs. Another thing I love about Rock Band is that it does allow you to import songs from one disk to another and it’s the same here – although, this time you aren’t importing songs, the game comes with a code that lets you download all the tracks for playback through Rock Band. I actually stuck with the Classic Rock disk because the tracks are “lost” in my Rock Band library.

My main problem with Rock Band is that I don’t think the note chart “scales” very well. The game in Normal mode is way too easy, slow and sort of boring to play until you get up into the more “difficult” songs. But you switch it to Hard and it’s, um, HARD, I wish there was a Hard or Expert mode where you didn’t have to use the annoying Orange button.

When reviewing one of these games it’s pointless to talk about the set list because it comes down to personal preference and who am I to say it sucks or is great. But the folks at Harmonix have pulled together an eclectic mix of “Classic Rock” tracks here.  I do like a good 40 percent of the tracks.

Rock Band Track Pack: Classic Rock is an interesting experiment and addition to the Rock Band family, it’s a nice expansion pack that’s priced about right. I just hope the folks at Harmonix don’t go to far down this road, but as long as they keep the tracks compatible and importable with the Main Rock Band game I can’t hate on it, unlike the Guitar Hero franchise where none of the games are compatible with each other. I’ll admit I’m getting tire of the Rock and Metal and hope they expand into other genres like Pop, R & B and when am I going to get a Prince collection – knowing the Purple one, probably never.  Overall, decent little package.
Final Grade B
EM Review
By Michelle Alexandria
Originally Posted 6.07.09