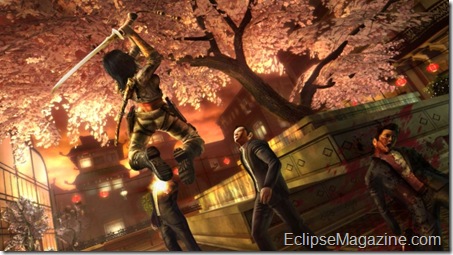 Wet is one of those games that I hate to review because it has so many interesting concepts and things going for it but the one important thing – gameplay. It seems like every time the developers reached a crucial junction they went with option B instead of the easy A. Let’s start with the positive.

I love the presentation of this game. Playing it I felt like I was in a Tarantino movie. The grind house tint, the over the top violence, the funny/cute intermission videos, the cool spaghetti western and alternative soundtrack really fit the mood – I would love to buy a Wet soundtrack. The story is told in a breakneck, fast paced way that kept me interested throughout most of it. The drawback would be the Developers should have saved the money they used to get Eliza Dushku to voice Ruby. The rare occasions she actually has something to say comes across as bored indifference, which in a strange way fits Ruby’s character because she is, after all, a mercenary. The feel and look of the game goes a long way to making me forgive a lot of the game’s major drawbacks. I was genuinely sucked in Ruby’s strange world. The cut scenes are all nicely rendered, integrated seamlessly and skippable after the first viewing.

After each mission is completed all forward momentum and excitement is stopped to force you to play some ridiculous challenge mode where you run an obstacle course to learn your new weapons. Hey, I just finished playing your stupid game for an hour or three hours I don’t need to learn how to shoot a gun or wall run through some stupid rings again. It wouldn’t be so bad if a) these challenge modes were connected to the main story or b) the controls and camera angles weren’t so flakey that I found myself spending an hour on these modes, something that should have literally taken less than 3 minutes.

It’s weird you get regular achievements and trophies but they never appear when you get them. So for most of the game I was getting a little irritated and wondering what did it take to get an achievement point?

At its core Wet wants to be a Max Payne style shooter, only this time almost everything you do is in bullet time. It’s very easy to pull off, hit the jump button and Rubby flies the air all graceful like, while you in the air you can shoot two guns one – auto targets while the other one is free hand. The problem is the freehand target view is mapped to the right stick and it moves very slow making targeting really frustrating. Not only that but there’s a lot going on at the same time – press the jump button, control Ruby with the left analog stick, shoot with the right trigger, look at all the baddies on the screen and oh yeah aim with the right stick? Not only that, unless you get a head shot it took almost an entire clip to kill a minion. It all looks stylish and cool it’s just not very functional. After awhile I just jumped right into the middle of a group of baddies, whipped out the old trusty sword and split them in half. 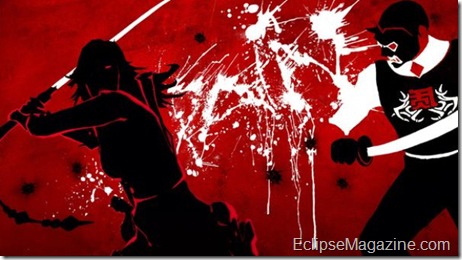 There are times in the game where Ruby is really hard to control if you barely touch the stick her movements become really "broad" making it hard to make crucial jumps. It’s as if you are controlling a ragdoll. Even though you can kill all the bad guys using the same two or three moves the game gives you extra points you dispatch them with some style and pizzazz. At the end of each level you get a score and earn money on your kills. This allows you to purchase upgrades for your abilities and gear. The gear in the game is pretty unimaginative it’s basically guns, shotguns, and machine guns. Since the guns seem to have no real difference in impact (it takes a full clip of regular or machine guns to kill the noname bad guys) I eventually just upgraded all my abilities.

I eventually grew to hate the boss battles because the game doesn’t provide any help or hints as to how you are supposed kill them. And that’s another annoying thing the game gets hard due to some weird design decisions. Like the idea that there’s no indicator that says how to defeat certain bosses, or there’s this really amazing sequence where you are in a plane that explodes. You have to jump and at that the point the game doesn’t really tell you what to do next. Obviously you have to kill all the bad guys who are somehow still shooting at you while they (and you) fall to your death but I wasn’t clear if I had to shoot everyone or just survive long enough to get to the next stage of this freefall. After 15 tries I finally got to the next stage of my death jump.

From the very cool Freeway chase sequence to the before mentioned death dive and a really cool sequence where everything goes Red when Ruby gets blood in her face, the designers of the game show a heck of a lot of imagination for a shooter that could have easily been a go from warehouse to warehouse type of game. I was almost never bored playing the game. Frustrated yes, bored no.

I really wanted to love Wet it’s bold and different, but not really ambitious. I was hooked on it for the first four hours but eventually the bad game controls and camera angles beat me down. I gave up when, I assume, was probably close to the end (another new pet peeve of mine is the total lack of progression meters in games). I’ll probably come back to it when I don’t have so many other games to go through. Wet is like a Dry Martini that needs just a little more shaking. It’s definitely worth a rental. The game is available now on all consoles.