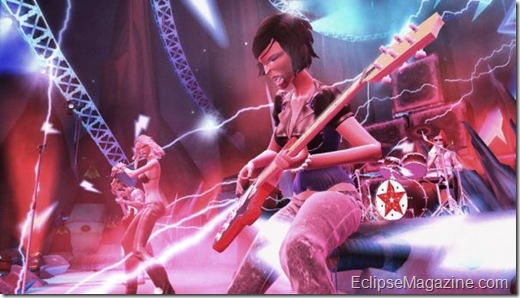 Instead of giving us the ability to import songs from previous games into whatever current Guitar Hero is available the fine weasels at Activision are giving us a goofy greatest hits collection, called Guitar Hero: Smash Hits.  If I didn’t already own all the Guitar Heroes, this would be a cool package. But I do and I never play the older titles because it’s a pain in the but to try and figure out which track is on which disk, then change the disk to play one song. So now we have this. On the positive side all of these tracks will be redone so the charting should be better and we’ll have full band play. Activision is dragging out the announcement of the set list by having an online voting contest and revealing new tracks every Thursday.

Activision needs to stop milking this cow and go the Rockband massive DLC route, all of these various incompatible disk releases is out of control. The new game will have 48 tracks. Here’s what we have so far, I won’t buy this one, but I’ll certainly ask Activision to send me a copy. So far I’m kind of “Meh” on the list but tt has Freebird, come’on Freebird!  I still remember struggling through that crappy Metallica song to unlock Freebird and how proud I was when after 30 tries I finally did it.