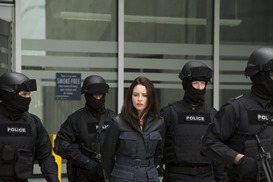 Time travel, heavy metal, bizarre creatures, purple goop and more highlight Syfy’ spring schedule as Continuum (April 4) and Warehouse 13 (April 14) return and Metal Hurlant Chronicles (April 14),a series based on the French anthology comic series, lead the net out of the winter doldrums.Plus, a new Syfy Original movie, Zodiac: Signs of the Apocalypse about and ancient artefact that might just be responsible for the apocalypse.

PLUS FAREWELL SEASON OF BELOVED WAREHOUSE 13

NEW YORK – February 14, 2014 – The debut of the new reality series Jim Henson’s Creature Shop Challenge (March 25), the fifth and final season of the much beloved Warehouse 13 (April 14), a trio of weekly Tuesday night original specials – Carvers (March 4), My Big Fat Geek Wedding (March 11) and Foxy & Co. (March 18) – and the Season 3 return of Continuum (April 4) will be among the original programming highlights of Syfy’s 2014 spring primetime schedule.

MY BIG FAT GEEK WEDDING                                                                    (ORIGINAL SPECIAL)
Premieres Tuesday, March 11 at 10 PM – In the original, one-hour special My Big Fat Geek Wedding, Syfy presents the wedding of Julian Roman and Mandie Bettencourt, geeks in love who met online while playing “Final Fantasy.” After an eight-year courtship, Julian popped the question onstage at a renaissance fair. Now the couple is excited to create a medieval fantasy style wedding that is a true reflection of their relationship and shared passions, complete with a ring bearer hawk swooping down from the sky. The couple enlists a team of experts to help bring their fantastical ideas to life, led by wedding planner Kristin Banta. With ten years of wedding planning experience under her belt, Kristin has executed everything from a Victorian Tim Burton themed-wedding to a Pirate-themed affair. Anything Kristin executes is a jaw-dropping extravaganza. To make the wedding even more spectacular, Kristin has brought Brandon Hillock to the team. Brandon is a party planner, genre expert, Cosplayer and the founder of Character Masters, a theme-driven event planning company. Kristin and Brandon will take the couple on the ride of their lives as they scout possible castle venues, choose elaborate costumes, create wondrous props, plan a swordfight, and even execute a dragon surprise that promises to make this wedding the ultimate celebration of fandom and love. My Big Fat Geek Wedding is produced by T Group with Jenny Daly serving as executive producer.

Premieres Tuesday, March 25 at 10PM – Syfy introduces ten hopeful creature designers who have come to Los Angeles with an incredible shared dream: to land a job working in Jim Henson’s Creature Shop™. The new eight episode reality competition series provides a fascinating window into the imaginative and wildly creative environment of world-class creature design, fabrication and mechanization. The series features host Gigi Edgley (Farscape) and lead judge Brian Henson, Chairman of The Jim Henson Company, who also oversees the groundbreaking work of Jim Henson’s Creature Shop™. Henson is an award-winning writer, puppeteer, director and producer whose mentor was his father, the iconic genius Jim Henson. The competing creature designers are allowed unprecedented access to the world-renowned Creature Shop, gaining hands-on experience to learn every aspect of what it takes to become a master creature designer.  Following a series of elaborate challenges, only one will be awarded a prize worth up to $100,000, including the opportunity for the job of a lifetime – a contract working at the world-renowned Jim Henson’s Creature Shop™.

Returns Friday, April 4 at 10PM – Season 3 of Continuum amplifies the mythology, technology and the stakes of time travel to an intense and personal level. At the end of Season 2, Alec Sadler made the Earth-shattering decision to hijack Kiera’s (Rachel Nichols) chance to get home, in order to save Emily, the girl he loves, from certain death. This act of desperation not only jettisoned Alec into the near past, but it condemned Kiera to incarceration by the Freelancers, who are ‘collecting’ time travelers in order to protect history. Now, Kiera must face the consequences of Alec’s betrayal and somehow escape the Freelancers. Even if she can, has Alec’s decision to time travel already changed the future in ways Kiera couldn’t even imagine? What will Kiera sacrifice to ultimately survive – and how will Liber8 factor into this challenge?

Returns Monday, April 14 at 9PM – Everything has been building to the fifth and final season. Claudia’s (Allison Scagliotti) epic battle with Paracelsus (Anthony Head) will unleash an unexpected horror — and the Warehouse may never be the same. In the new season, the entire Warehouse team confronts old questions – and new revelations. From a painful realization that Pete (Eddie McClintock) and Myka (Joanne Kelly) must face, and Artie (Saul Rubinek) accompanying Claudia on a soul-searching journey about her sister, to Steve (Aaron Ashmore) colliding with his past, the final six episodes of Warehouse 13 takes viewers on an emotionally-charged roller coaster ride. Warehouse 13 is produced for Syfy by Universal Cable Productions. Jack Kenny (The Book of Daniel) is executive producer and showrunner.

Premieres Monday, April 14 at 10 & 10:30PM – Based on the popular comics anthology Metal Hurlant, each of the 12-episodes (comprising Seasons 1 & 2) take place on a different planet with a different cast, linked together by the presence of an asteroid, which plays a vital role in their lives – and the future of their civilization. The international cast includes James Marsters, Rutger Hauer, Michael Jai White and Joe Flanigan.

Premieres April TBD – A curator of her university’s collection of antiquities is thrilled when a new artifact arrives: a 2,000-year-old ivory carved astrology board. But little does she know that the fate of all humanity will soon be decided by this ivory board’s deadly forces. Stars Joel Gretsch (V), Aaron Douglas (Battlestar Galactica), Andrea Brooks (50/50) and Christopher Lloyd (Back to the Future).