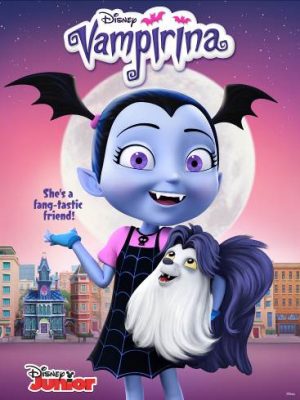 Vampirina follows Transylvanian transplant Vampirina (aka “Vee”) as she faces the joys and trials of being the new kid in town including making friends and attending a new school in the human world – and as her family adjusts to their very different Pennsylvania neighborhood.

Vampirina premieres on disney Channel and Disney Jr. simultaneously on October 1st – and will be featured in exclusive Disney Junior at the Movies – HalloVeen Party! screenings presented by Fathom Events.

Special screenings of “Vampirina” will take place at movie theaters across the U.S. on Saturday, October 21; Thursday, October 26; and Saturday, October 28, as part of  “Disney Junior at the Movies – HalloVeen Party!,” presented by Fathom Events. The screening events will include a never-before-seen episode of “Vampirina,” a costume party for kids and families, with more to be announced soon. Tickets go on sale Friday, September 22, at FathomEvents.com/DisneyJunior.

Set in a Pennsylvania neighborhood, the series stars Lauren Graham, James Van Der Beek and Isabella Crovetti as the Hauntley family, friendly vampires who have recently moved from their home in Transylvania. The stories follow Vampirina (aka “Vee”) as she faces the joys and trials of being the new kid in town including making friends and attending a new school in the human world. Along the way, Vee learns that it may be easier to blend in with her peers, but it’s more valuable to celebrate the qualities that make each individual unique.

Extensions for the series include multiple storybook and early reader book titles from Disney Publishing Worldwide, as well as dolls, plush, playsets and role-play products from Disney Consumer Products and Interactive Media launching October 1. “Vampirina” will be available on Disney DVD beginning Tuesday, October 17 and will include four 22-minute episodes.