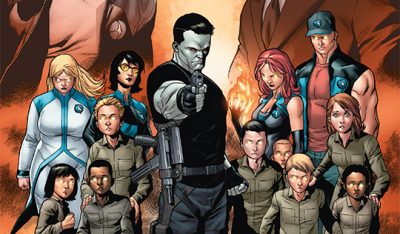 Then, on May 30th, Harbinger Wars 2 brings the entire Valiant roster into this year’s event series to face their biggest threat yet – the government!

Valiant is proud to announce the HARBINGER WARS COMPENDIUM – A MASSIVE, 750+ PAGE COLLECTION representing the march toward the original groundbreaking crossover event that collided the opposing factions of the Valiant Universe together for the very first time in an extra-sized, softcover format!

Collecting the entire first years of both HARBINGER (#1-14) and BLOODSHOT (#1-13) alongside the HARBINGER WARS event series (#1-4) in complete chronological order for the first time between two covers, get the whole story behind the definitive Valiant crossover event – just as HARBINGER WARS 2 gears up for an all-out assault on Valiant’s most formidable heroes in May!

When an untrained and undisciplined team of super-powered test subjects escape from Project Rising Spirit and onto the Vegas Strip, Bloodshot and the Harbinger Renegades will find themselves locked in battle against a deadly succession of opponents – and each other. As the combined forces of the H.A.R.D. Corps, Generation Zero, and omega-level telekinetic Toyo Harada all descend on Las Vegas to vie for the control of Rising Spirit’s deadliest assets, the world is about to discover the shocking price of an all-out superhuman conflict…and no one will escape unscathed. Who will survive the Harbinger Wars?

As HARBINGER WARS 2 looms on the horizon, discover why the original HARBINGER WARS conflict established Valiant as the preeminent publisher of quality events anywhere in comics today…and introduced a whole generation of fans to the high-stakes world of the Valiant Universe’s most unlikely heroes:

“????½… An intense and violent intersection of the most compelling superhero universe on the stands.” – IGN

“????½… [HARBINGER WARS] is the culmination of a year’s worth of carefully planned plot threads that finally pay off at all once.” – Bloody Disgusting

“????… Valiant proves that the dreaded crossover event story can be good, and satisfying.” – Comic Book Resources

“????… An absolute blast that brings the best of both HARBINGER and BLOODSHOT to the table. What’s not to like?” – Multiversity Comics

Featuring the first modern appearances of Bloodshot, Faith, Generation Zero, Toyo Harada, Livewire, Peter Stanchek, and dozens more, the HARBINGER WARS COMPENDIUM is the ultimate entry point into the most celebrated superhero universe anywhere on the stands today! Arriving just in time for the fifth anniversary of HARBINGER WARS’ initial impact, get both the renowned runs of HARBINGER and BLOODSHOT, plus the complete HARBINGER WARS saga, together in one deluxe package on May 2nd!

For the rare and immensely powerful subset of humanity known as psiots, their unique abilities have come with an enormous cost. Once, their existence was known only to a select few. Now, the revelation that thousands of these latent telekinetic “harbingers” secretly live among us…with the potential to become active at any moment…has led the American government to a dramatic tipping point…

Armed with new extra-governmental authority, the deep-black military contractor known as Omen has been authorized to identify, evaluate, and, if need be, eliminate all super-normal threats to the homeland. H.A.R.D. Corps units have been deployed into cities and towns across the United States to enforce their orders.

In the East, one of the most powerful minds on Earth, Peter Stanchek, is leading his band of Renegades across the country, activating any potential psiots willing to join them, and building an insurrection force of ultra-powerful and unwieldy new abilities that will soon bring war to Omen’s doorstep…and the unstoppable force known as X-O Manowar raging back to Earth…

In the West, Livewire – the telekinetic technopath with the ability to bend machines and computers to her will – will be forced to choose between her former allies…or her newfound team of Secret Weapons. As the situation escalates beyond human control, the United States will be plunged into darkness from coast to coast, launching Bloodshot and Ninjak into a dangerous mission to neutralize their one-time teammate – and setting the stage for the most shocking, most violent, and most consequential clash of powers ever witnessed in the history of the Valiant Universe!

First: On May 2nd, witness the ground zero moment for the future of the Valiant Universe with a startling, self-contained initiation into the senses-shattering clash of 2018 in HARBINGER WARS 2: PRELUDE #1 by Academy Award nominee Eric Heisserer (SECRET WEAPONS, Arrival) and visionary artists Raúl Allén (SECRET WEAPONS) and Patricia Martín (BLOODSHOT REBORN)!