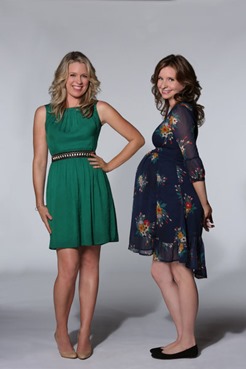 USA Network has announced a premiere date for its new half-hour comedy, Playing House. Starring Jessica St. Clair (who also executive produces) and Lennon Parham, Playing House is the story of long separated best friends who come together again at the precise point in time when they need each other the most.

The series will premiere with back-to-back episodes on April 29th (10/9C) before resuming with a new episode every Tuesday, beginning May 6th. For more details, check out the press release following the jump.

UNIVERSAL CITY, Calif. — February 28, 2014 —USA Network’s new comedy PLAYING HOUSE will premiere Tuesday, April 29 (10-11 p.m. ET/PT) immediately following top comedy series MODERN FAMILY with two back to back episodes.   Following the premiere, the series will resume with a new half-hour episode every Tuesday beginning May 6 (10-10:30 p.m. ET/PT).  The series, starring and executive produced by Jessica St. Clair (“Best Friends Forever”) and Lennon Parham (“Best Friends Forever”), is a single-camera buddy comedy about what happens when two best friends come back together just when they need each other the most.

Childhood best friends Maggie Caruso and Emma Crawford have shared countless adventures growing up together in the charming town of Pinebrook, CT.  Now, Maggie and Emma are in store for one of their biggest adventures yet—raising a baby.  When Maggie discovers that her husband is having an online affair with a muscular German woman, Emma gives up her burgeoning business career in China to stay in their hometown and help Maggie raise her baby.  Meanwhile, as Maggie prepares for the birth of her first child and the fallout of her marriage ending, Emma must confront the past that she abruptly left behind thirteen years ago — her first love and local cop Mark (Keegan-Michael Key), her prim-and-proper mother (Jane Kaczmarek) and a small town that she’s never felt comfortable in.  Despite their differences – Emma is brash, bold, and assertive while Maggie is grounded, rational, and safe – the women complement each other the way only best friends can, by facing the challenges of their past, present and future–together.

About USA Network
The #1 network in all of basic cable for an unprecedented eight straight years, USA Network is seen in over 102 million U.S. homes.  USA is a leader in scripted programming with a powerful stable of originals, spectacular live television and is home to the best in blockbuster theatrical films, a broad portfolio of acquired series and entertainment events.  A trailblazer in digital innovation and storytelling, USA is defining, driving and setting the industry standard for Social TV.  USA is a program service of NBCUniversal Cable Entertainment, a division of NBCUniversal. The award-winning website is located at http://www.usanetwork.com.