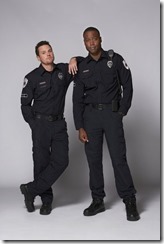 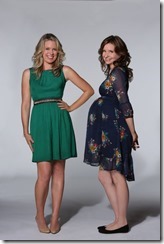 USA Network is going where it’s never gone before – original half-hour comedy. The network has ordered its first original sitcoms –  EMT comedy Sirens (above left), from Denis Leary & Bob Fisher and buddies reconnecting comedy Playing House (above right), from Lennon Parham & Jessica St. Claire. The network also picked up Love Is Dead – about a company that specializes in breaking up relationships for those who can pay to not be there when it happens – from Chuck’s Zev Borow.

The new comedies will debut in early 2014 and are expected to complement Modern Family, which the network will begin running on September 24th. For details, follow the jump.

NEW YORK – May 16, 2013 – USA Network today greenlit its first original half-hour comedies, with series orders for SIRENS from Denis Leary (“Rescue Me”) and Bob Fisher (“Wedding Crashers”) and PLAYING HOUSE from Jessica St. Clair (“Bridesmaids,” “Best Friends Forever”) and Lennon Parham (“Best Friends Forever,” “Accidentally On Purpose”). The network also picked up a new comedy pilot, LOVE IS DEAD. The new series will debut in the first quarter of 2014, and will be strong complements to MODERN FAMILY, the award-winning and top-rated comedy, which premieres on USA Tuesday, September 24 at 8/7c. The announcement was made in conjunction with USA’s Upfront (#USAupfront), which is being held today at Pier 36 in New York.

“This is the right time to be introducing half hour original comedies to the USA audience. With MODERN FAMILY joining our line-up in the fall, we can leverage television’s most popular comedy to serve as a powerful launch pad for new originals in this genre,” said Chris McCumber, Co-President of USA Network. “Our new series come from some of the best comedic talent in the business, and reflect USA’s style – with great characters, strong execution and compelling storytelling,” said Jeff Wachtel, Co-President of USA Network.

From the distinct comedic point of view of Leary and Fisher, SIRENS follows three of Chicago’s best EMTs whose sometimes silly, self-righteous and even self-destructive personalities make them unqualified for sustaining relationships, friendships and most occupations. They are, however, uniquely qualified for saving anyone who winds up in their ambulance. Based on a UK format, SIRENS stars Michael Mosley (“Pan Am”), Kevin Daniels (“Modern Family”), Jessica McNamee (“The Vow”) and Kevin Bigley (“Game Change”). Leary and Fisher co-wrote the pilot and both executive produce the series. Jim Serpico ("Rescue Me") of Apostle, and Hal Vogel, David Aukin (“Hyde Park on Hudson”), and David Leach of Daybreak Pictures also executive produce. Filmed on location in Chicago, the series is from Apostle and Fox Television Studios, in conjunction with Daybreak Pictures.

PLAYING HOUSE is a single-camera buddy comedy about what happens when two best friends come back together, just when they need each other most. The original half-hour series is inspired by the ultra-close friendship between St. Clair and Parham. In PLAYING HOUSE, when mother to-be Maggie (Parham) asks her single and career-driven best friend Emma (St. Clair) to return home from her job overseas to attend her baby shower, she has no idea what’s truly in store. Parham and St. Clair co-wrote the presentation and will executive produce the series along with Scot Armstrong (“The Hangover: Part II,” “Old School”) and Ravi Nandan (“Best Friends Forever,” “Animal Practice”) of American Work. The series is from Universal Cable Productions and American Work.

LOVE IS DEAD (pilot order): This single-camera comedy is set at a unique company that specializes in breaking-up romantic relationships — rationally, compassionately, thoroughly — on behalf of those who are willing to pay to not be around when it happens.  It’s the unconventional romantic comedy that asks: “Why, if love is so fickle, do we keep coming back for more?”  Written and executive produced by Zev Borow (“Chuck”), the pilot is from Universal Cable Productions and Gaumont International Television. Katie O’Connell, Elisa Roth, Sidonie Dumas and Christophe Riandee executive produce for Gaumont International Television. The pilot is based on the award-winning French short film of the same name, written and directed by Eric Capitaine and produced by Carole Lambert and Carine Ruszniewski of De Films Aiguille.

The #1 network in all of basic cable for an unprecedented seven straight years, USA Network is seen in over 102 million U.S. homes. USA is a leader in scripted programming with a powerful stable of originals, spectacular live television and is home to the best in blockbuster theatrical films, a broad portfolio of acquired series and entertainment events. A trailblazer in digital innovation and storytelling, USA is defining, driving and setting the industry standard for Social TV. USA is a program service of NBCUniversal Cable Entertainment, a division of NBCUniversal. The award-winning website is located at http://www.usanetwork.com. Characters Welcome.